Why TAME is proud of Board Member Tamara Crawford 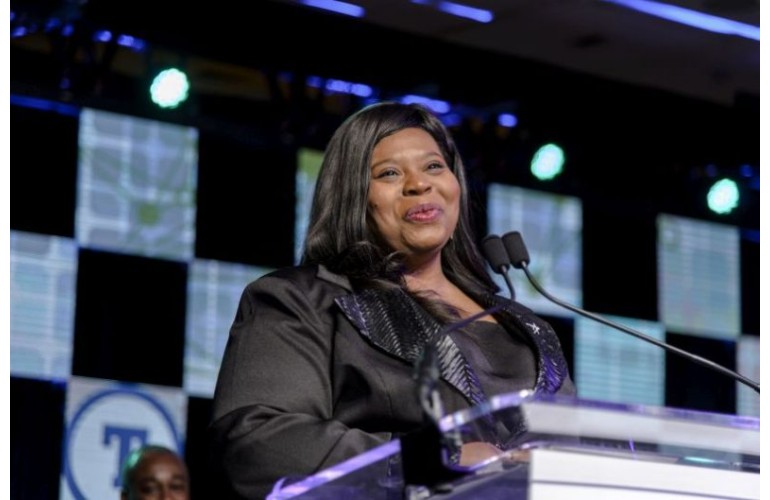 In just 13 years, Tamara Crawford amassed an extraordinary record with Lockheed Martin. Previously she was lead systems engineer on the F-22 Raptor, the world’s only fifth-generation fighter.

When she received a Special Recognition Award at the HBCU Engineering Deans Breakfast during the BEYA STEM Conference, she was responsible for product performance of the C-130, C-5, P-3, F-16, F-22, and Lockheed Martin’s F-35 fighter programs.

Tamara was also responsible for overseeing the dismantling of the F-22 production line; preserving those production components for future use. With no standard model, hers will be the blueprint that will be used going forward.

“As a 13-year-old girl from a small Mississippi town in eighth grade, I decided to become an engineer,” Tamara said in her acceptance speech at the 2016 BEYA STEM Conference HBCU Engineering Deans event. “In my junior year in college, I read the book Skunkworks which discusses Lockheed Martin’s development of stealth technology. And I declared, ‘I’m moving to Texas to work for Lockheed Martin!'”

Fresh out of college with a bachelor’s degree in mechanical engineering, she headed to Texas in 2002.

“I  set out with no job interview, or connections, And with only $292 in my pocket. Fast forward thirteen years. Service is inextricably woven into the tapestry of my life. My joy is inspiring youth through STEM,” she said with a smile.

Tamara is a board member of the Texas Alliance for Minorities in Engineering (TAME).

Since 1976, TAME has been working to build a strong science, technology, engineering, and math (STEM) workforce with more women and minorities contributing to the world through STEM careers. Over the past thirty years, they have reached hundreds of thousands of students through statewide programs that motivate, inspire and prepare K-12 students to pursue careers in STEM.

According to TAME, their programs depend on the support of over 800 volunteers like Tamara from industry, schools, libraries, and local communities. Every year, the TAME Trailblazers travel over 20,000 miles around Texas, sharing math and science exhibits with more than 20,000 students.

When Tamara began working on the F-35 program, she was the only American on the team, the single woman, the only person of color, and the youngest member of the team. Her exceptional performance resulted in an invite to become a permanent member.

“I had three brothers. I was the only girl,” Tamara said. “I had learned how to succeed in an atmosphere dominated by men.”r home in New Albany, Mississippi.

Tamara, who is seen here with her parents and one of her brothers at the 2016 BEYA STEM Conference, was featured in Sassy Tech Girl magazine’s 2015 spring issue.

The aeronautical engineer is one of 25,000 people who specialize in aircraft design and stealth technology. The products they work on play an essential role in the national security of the United States and more than 70 other countries around the world.

Howdy would you mind sharing which blog platform you?re working with?
I?m looking to start my own blog soon but I?m having a difficult time making a decision between BlogEngine/Wordpress/B2evolution and Drupal.
The reason I ask is because your design and style seems different then most blogs and I?m looking for something completely unique.

P.S Apologies for being off-topic but I had to ask! https://www.m2move.ca