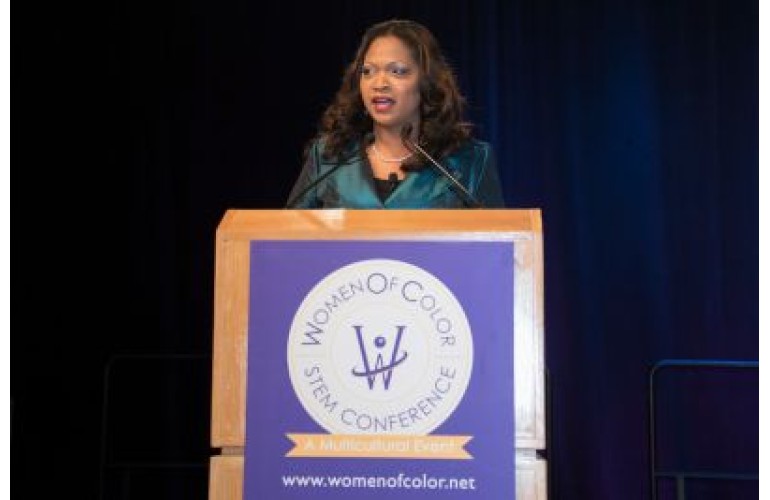 The Women of Color in Science, Technology, Engineering, and Math (STEM) Conference celebrated its 20th year at their annual gala Saturday in Detroit, Michigan, honoring women in scientific and technical fields.

Reaching the 20th milestone is proof of the important work that was being done noted one conference sponsor.

“I’d like to acknowledge the hundreds of talented individuals over the years who’ve worked so hard to build this platform,” said Dave Veres, executive director of government services at Aerotek, which provides recruiting and staffing to many industries focusing on technical, professional and industrial staffing.

“But here’s the real question: What will this room look like 20 years from today,” asked Veres.

That’s a great question, said gala emcee Pamela McCauley, who was at the very first Women of Color STEM Conference held in Washington D.C. in 1996.

“We all have a responsibility that it’s at least twice this size,” McCauley said.

‘STEM is a girl thing’

“Since its origin, 20 years ago, and I was there in the nation’s capital, the conference has proudly paved the way for the advancement of women who are traditionally underrepresented in STEM,” McCauley added.

A poster child for the Women of Color in Science, Technology, Engineering, and Math Conference, McCauley had dreamed of becoming an astronaut since she was a little girl, sleeping in the roll-away bed on the porch of her grandmother’s house in Spencer, Oklahoma.

From 1997-1999, McCauley, now a tenured professor in the Department of Industrial Engineering and Management Systems at the University of Central Florida, was an MLK visiting professor at MIT, hosted by the Department of Aeronautics and Astronautics.

“We take this responsibility seriously and we’ve seen the results of sharing and mentoring,” McCauley said. “So many wholeheartedly have supported Women of Color’s hashtag campaign #STEMISAGIRLTHING” on social networks.

Since 1996, Career Communications Group (CCG), the company behind the Women of Color STEM Conference, has published and promoted the profiles of thousands of women in science, technology, engineering, and math in CCG’s Women of Color, Hispanic Engineer, and Black Engineer magazines.

Among those featured over the years are Technologists of the Year-the most prestigious Women of Color STEM Award.

“Powerful stories, extraordinary women inspire us all to encourage girls and women in our lives,” Veres said. “It’s estimated that by 2020, just a few years away, the demand for STEM professionals will add over a million jobs in the U.S. alone.”