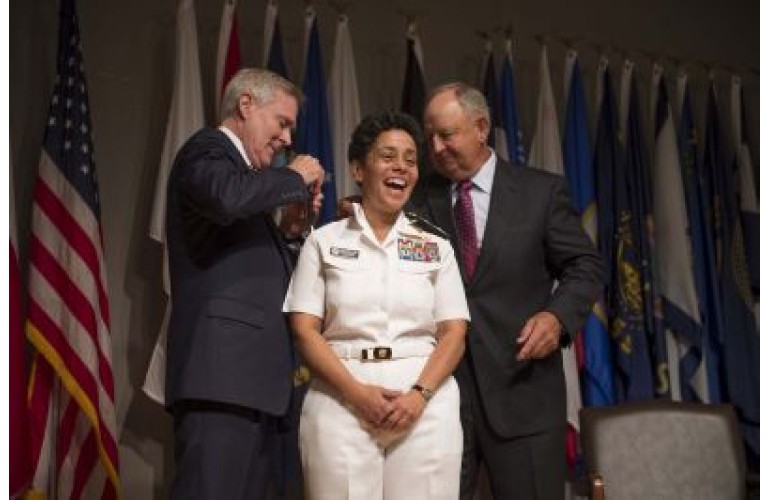 Michelle Janine Howard, a 2008 Women of Color Career Achievement Winner, became the first woman to attain the rank of four-star admiral in the Navy’s 238-year history during a ceremony at the Women in Military Service for America Memorial at Arlington National Cemetery.

Navy Secretary Ray Mabus presided over the ceremony and administered the oath of office.

“Michelle Howard’s promotion to the rank of admiral is the result of a brilliant naval career, one I fully expect to continue when she assumes her new role as vice chief of naval operations, but also it is a historic first, an event to be celebrated as she becomes the first female to achieve this position,” Mabus said.

“Her accomplishment is a direct example of a Navy that now, more than ever, reflects the nation it serves — a nation where success is not born of race, gender or religion, but of skill and ability.”

Navy Adm. Jonathan W. Greenert, chief of naval operations, noted Howard’s success through more than decades of service. “Michelle’s many trailblazing accomplishments in her 32 years of naval service are evidence of both her fortitude and commitment to excellence and integrity,” he said. “I look forward to many great things to come from the Navy’s newest four-star admiral.”

On March 12, 1999, Vice Adm. Michelle Howard took command of USS Rushmore, becoming the first African-American woman to command a ship in the U.S. Navy. In 2006, she was selected for the rank of rear admiral lower half, making her the first admiral selected from the United States Naval Academy class of 1982 and the first woman graduate of the academy selected for admiral. She was promoted to three-star rank in 2012.

VADM Howard’s initial sea tours were aboard USS Hunley and USS Lexington. While serving aboard Lexington, she received the Secretary of the Navy/Navy League Captain Winifred Collins award in May 1987. This award is given to one woman officer a year for outstanding leadership. In January 1996, she became executive officer of USS Tortuga and deployed to the Adriatic in support of a peacekeeping effort in the former Republic of Yugoslavia.

Sixty days after returning from the Mediterranean, Tortuga departed on a training cruise where the ship’s sailors, with embarked U.S. Marines and U.S. Coast Guard detachment, operated with the naval services of seven African nations. Howard commanded Amphibious Squadron 7 from 2004 to September 2005. Deploying with Expeditionary Strike Group 5, operations included tsunami relief efforts in Indonesia and maritime security operations in the Persian Gulf.

She also commanded a multinational force established to conduct counter-piracy operations in the Indian Ocean aboard the amphibious assault ship USS Boxer in April 2009.

Howard’s shore assignments include action officer and Navy liaison to the Defense Advisory Committee on Women in the Military Services in the Bureau of Personnel.

Rear Adm. Michelle Howard, was honored as a 2008 Women of Color Career Achievement Winner, which recognized her career-long achievement in technology and her commitment to the Navy. The Deputy Commander of United States Transportation Command, Vice Adm. Ann Rondeau, acted as the awarding official for the Navy honorees. She is was also selected into the prestigious Career Communications Group Hall of Fame in 2010.