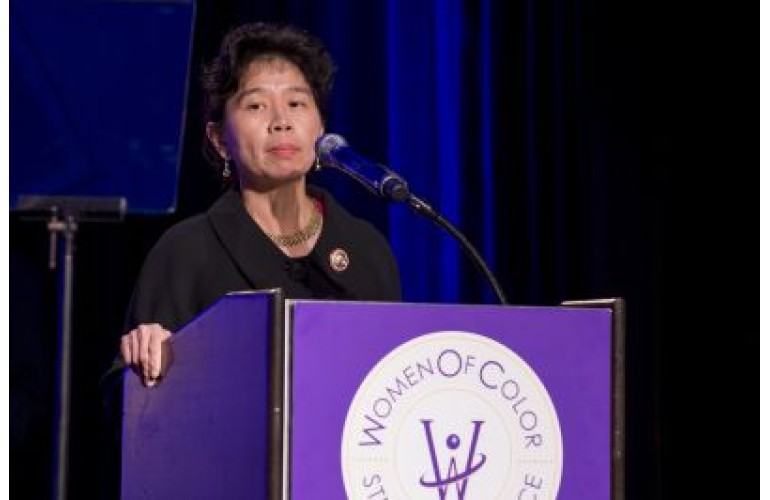 #STEMISAGIRLTHING webinar presenter Imani Carter hosted Rupali Lunani, Thursday, September 24. Lunani, a manager at General Dynamics, treated the audience to her insights and expertise on taking responsibility for one’s career in the automotive industry. And, what she thinks of Sonya Sepahban.

Over 15 years in the auto industry, Rupali Lunani has worked for Ford, Motorola, Getrag, Fisker automotive, and most recently General Dynamics.

“As a young professional, it’s critical to have a long-term vision,” Lunani said. “You need a big picture goal of where you want to be and strive toward that.”

But just how did she map a career path, make blockbuster contributions, and all the while keep moving on and up? How did Lunani stay firmly in the driver’s seat?

From Ford, the second-largest American automaker, to Getrag, a major supplier of transmission systems for passenger cars and commercial vehicles, to Fisker, which produced some of the first plug-in hybrid electric vehicles, and now General Dynamics – a leader in military vehicles like the Abrams battle tank and wheeled combat vehicles?

Managing up and around the world

At Motorola, Lunani worked with talent in Australia, Russia, Mexico and Scotland making a cost saving of $800, 000. While at Getrag, in 2005, she was instrumental in defining software strategy and architecture to maximize reuse across product platforms. Later, as a senior manager, she launched and managed a technology automotive transmission program for nine countries around the world. She also established a service parts business at Getrag, which led to $100 million in revenue. At Fisker, she was responsible for the electrical and software engineering for the Fisker Karma, a luxury hybrid electric vehicle out of Southern California.

“I started off working in software engineering,” Lunani explains. “Three or four years in, I figured out that at the end of my career I wanted to be in a vice president of engineering role.”

If she was going to grow in the software area, that company could only take her so far.

“That’s what I mean by identifying the business you’re in,” she said.

“A lot of times when you take up your first or second job, you’re not really thinking what the company is doing. You’re limited by your vision,” Lunani added.

On switching jobs, she advised that personal goals are aligned with the business goals of your employer as you identify opportunities, understand your niche, add value, and move up.

“I started off doing component engineering,” Lunani said. “As I worked on radios in the car, seats on the car, I wanted more. I wanted exposure to larger systems than what I was handling. So I made the switch to a transmission supplier. And then electrical and software engineering for the vehicle — from component to entire car. The reason I had that thought process was because as a vice president I need to understand all the other aspects,” she said.

‘Owning your career at General Dynamics’

“It’s my first experience working in a large organization,” Lunani said of her current employer General Dynamics, where she’s been for three years.

“A phenomenal place to be,” she enthused.

“The big news about working in a large corporation is that there are plenty of opportunities. Typically in small companies, you can wear multiple hats but are limited to random career growth. If it happens, it happens. Here, it’s a little bit more structured.

“I’ve been here for three years and taken the opportunity to meet a lot of the leadership. Feedback has been amazing. Always positive. Whether it’s a high skill or soft skill development.

“Leadership is very open to meet with you, understand what you bring to the table. I don’t have the 20-30 years as a lot of guys, and I haven’t worked with these guys for 20-30 years, but what am I going to do differently? It’s great that the company makes that happen, provides the platform that makes you able to do that.

“We have an open policy. Never felt constrained in any way. If you’re not comfortable talking to a senior vice president, the company provides various other forms types of communication platforms,” Lunani said.

For those who don’t know, ceiling breaker Sonya Sepahban recently retired as senior vice president of engineering design and development at General Dynamics Land Systems. Sepahban is also the 2012 Women of Color Technologist of the Year.

“I think she is a fantastic leader and made a fantastic impact while she was here,” Lunani said.

“A female minority running an engineering company. Really a great person, and a lot to learn from her,” she added.

Passionate about science, technology, engineering, and math (STEM),  Lunani introduced the Science Olympiad program at West Middle School, where she was a coach and mentor for six students (2 females and 4 males).

Additionally, she has been a robotics coach with Robofest since 2008. Her teams have competed in international competitions for middle school students. She has also conducted fund-raisers for Food for Education.

On Thursday, Lunani also had words of advice for a new generation of engineers:

“In college, you touched on different facets of engineering, but when you start working you’ll be narrowed to one or two courses learned at school. So what do you want to do? Maybe Hardware engineering, software engineering, or finance? Where do the opportunities lie? Where is the growth going to happen? Be on top of the mega trends,” Lunani noted.

“A lot of the electronics and automation we see is making our lives easier. It all comes down to business. Think about it from the business perspective. Products have to sell and they sell because they make life easier. Continuing growth. Environment. People are becoming more conscious about anything that impacts the environment,” Lunani observed.

1. Have a strong mentoring relationship. With your boss, and/or an independent person inside and outside the company. I have both; identified a mentor for myself when I joined General Dynamics the first six months.
2. Quantify results. Are you enhancing the bottom-line of the company?
3. Have a brand you’re recognized for. Sell yourself.
4. Network
5. Know your goals and what you’re open to
6. Ask for more responsibilities.