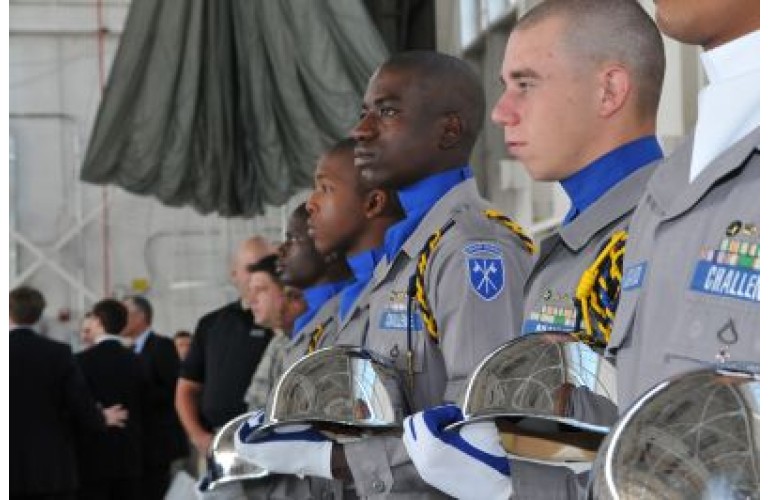 It’s a national problem that continues to rattle experts in education and social services. How do you help at-risk youth who are failing in a traditional educational and social structure?

While others are trying to figure it out, one organization has had several decades of success. The National Guard’s Youth ChalleNGe Program is in its 23rd year of redirecting the paths of young people who have dropped out of school and are facing an uncertain future.

Begun in 1993 through an act of Congress as a two-year pilot program, Youth ChalleNGe showed such positive results that it was expanded, and now there are 40 academies in 28 states across America. The programs are administered by the National Guard and financially supported by the federal government at 75 percent and 25 percent by a state government.

More than 149,000 young people have graduated from the program since it began. The 2015 Freestate ChalleNGe Academy in Aberdeen, MD, has an operational cost of $20,331 per cadet with a graduation target of 200 cadets per year. In 2015 it nearly met its goal, with 181 cadets graduating.

“The National Guard’s Youth ChalleNGe Program has provided more than 149,000 of our nation’s at-risk youth with skills to overcome everyday obstacles such as gangs, drugs, violence, and abuse,” said Gen. Joseph Lengyel, chief of the National Guard Bureau.

“This program was a response to the rise in high school dropouts and an effort to give those young adults every possible opportunity for success. There is nothing more important than investing in the future leaders of America.

Under the auspices of the National Guard, the programs provide five and a half months of residency in a quasi-military environment. The first few weeks can be particularly tough for the cadets as they adjust to living in barracks, rising early for physical training, and learning to say “Yes sir” and “No sir” as well as other disciplined styles of communication.

However, White explains, it’s not a boot camp in which trainees are yelled at or berated.
The program also is voluntary, and cadets can opt out at any time. White explained that the young people are counseled not to give up but to push through the difficult parts.

Jeffrey M. White, chief of athletics and youth development for the program, said Youth ChalleNGe has been successful because it removes young people from environments that are toxic and instead presents them with surroundings that promote achievement, opportunity, and support.
“What it boils down to is these kids, for the most part, deal with a lot of stressors in their life,” said White. “They don’t have a support structure.”

He said gangs, drugs, and violence are among the issues that many at-risk youths have had to contend with.

“They get that chance to focus on themselves,” he said.

The program accepts young people who have had trouble at home, at school, and with the law; however, those issues cannot involve violence, felonies, or mental health problems. Young people ages 16-18, when they apply, must agree to remain drug-free and not engage in any violent acts. They cannot be on parole or probation.

Cadets work on getting their GED, high school diploma, and high school and/or college credits while at the academies.

All graduating cadets leave with a life plan that they have developed and are assigned to mentors who remain in touch with them for 12 months.

“We provide a small amount of support while they reintegrate back into their world,” White said.

In Their Own Words: Youth ChalleNGe Success Stories

“I wasn’t a bad kid; however, I was being raised in a single-parent home and was not being successful in the traditional school setting. I have no regrets at all about attending the Mississippi Challenge Academy. The Academy gave me something that a traditional high school couldn’t: guidance, structure, and most of all, it gave me a solid foundation to start my career. Here it is 20 years later and I am 39 years old and serving on active duty as a United States Army Officer. I have a wonderful family and a host of friends that I wouldn’t trade for the world.”

“The transformation I noticed was magnificent. I had new values instilled within me, tons of discipline, integrity to choose the harder right over the easier wrong, and a new outlook on life. It’s like I was reincarnated; I left the academy a new person. The program taught me to rely on mental toughness, cerebral strength to grow from any experience in life, to utilize my talents at all times, to never underestimate nor overestimate my abilities, and to be truly committed to everything I do. Now I am a sophomore construction science and management major at Tuskegee University.”