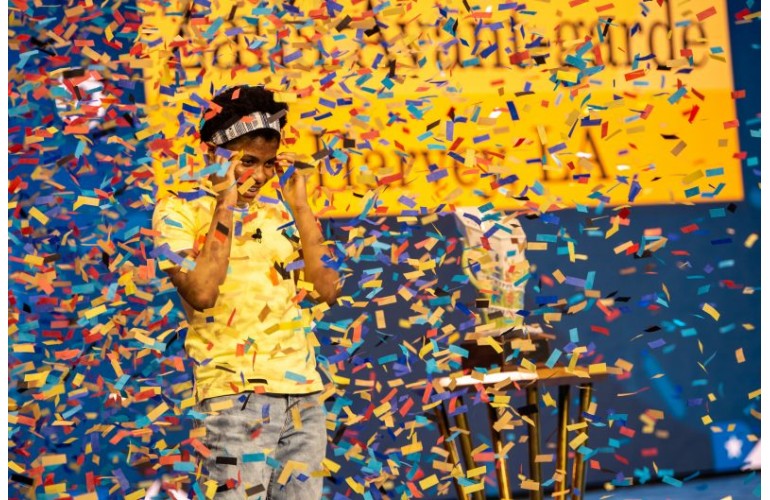 The contest helps students improve their spelling, increase their vocabularies and develop correct English usage that will help them all their lives.

On Twitter, @ScrippsBee tweeted congratulations to all their spellers. “We’re proud of everyone’s poise and courage in facing the dictionary,” they wrote.

Zaila is the first champion from Louisiana. The eighth-grader spelled uncommon words like Murraya (a type of tree) and retene (a crystalline hydrocarbon) to defeat her opponent Chaitra Thummala.

The two Bee finalists, Zaila and Chaitra, both competed in 2019. Zaila tied for 370th place and Chaitra tied for 51st.

It was the smile and twirls for us! After tying for 370th place in 2019, #Speller133 Zaila Avant-garde wins the 2021 Scripps National Spelling Bee.

Congrats to all of our spellers. We’re proud of everyone’s poise and courage in facing the dictionary. #SpellingBee #TheBeeIsBack pic.twitter.com/wHfYeU4CNl

“Zaila demonstrated incredible mastery of the English language with poise and perseverance. The excellence of all of our competitors, their hard work and commitment to learning, and their distinct stories, capture hearts and minds across the globe,” said Symson. “We take great pride in the way the Scripps National Spelling Bee, like so many of its spellers, adapted through difficult circumstances over the last year to safely bring back America’s favorite and longest-running educational competition.”

Avant-garde is the first Black American to be crowned winner of the Bee. This was her second time participating in the national finals. The first was in 2019. An eighth-grader at Clover Lane Homeschool, she was sponsored by the New Orleans Chapter of The Links.

On her path to the 2021 championship moment, Avant-garde was one of 209 national qualifiers this year and advanced through three levels of virtual competition: The Preliminaries on June 12, the Quarterfinals on June 15, and the Semifinals on June 27.

The Finals of the 93rd Scripps National Spelling Bee took place on Thursday, July 8, at 8 p.m. ET with 11 Finalists. Avant-garde competed in a suspenseful nine rounds: eight spelling rounds and a word meaning round. The total number of rounds in the competition was 18.

From Scripps: $50,000 cash prize, a commemorative medal, and the Scripps Cup, the official championship trophy of the Scripps National Spelling Bee
From Merriam-Webster: $2,500 cash prize and reference library from the Bee’s dictionary partner
From Encyclopædia Britannica: $400 of reference works, including a 1768 Encyclopædia Britannica Replica Set and a three-year membership to Britannica Online Premium
Chaitra Thummala of Frisco, Texas, and originally from San Ramon, California, representing the Bay Area Regional Spelling Bee, placed second in the competition and will receive $30,000.