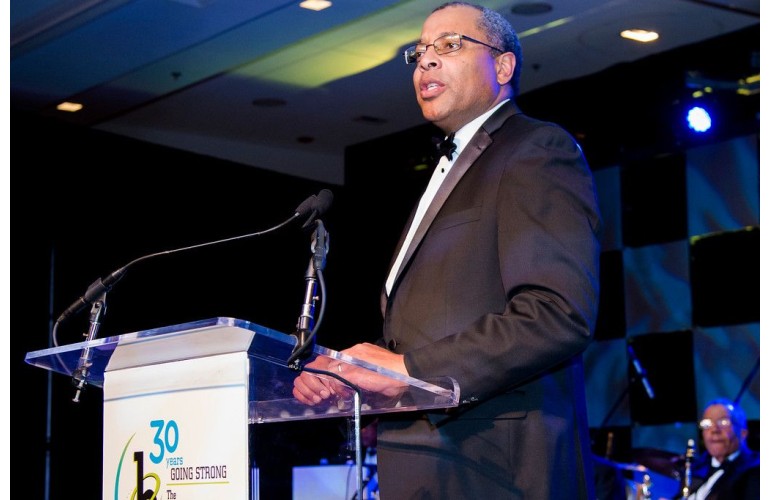 Christopher Jones, seen at the podium during the 2016 Black Engineer of the Year Awards (BEYA) gala, has been elected to the National Academy of Engineering (NAE). Jones was elected to NAE for his leadership of defense logistics, sustainment, training, and system readiness in support of U.S. national security.

Jones graduated from the Daniel Guggenheim School of Aerospace Engineering with a Ph.D. in 1986. After graduating from Georgia Tech, he served in the U.S. Airforce for nearly 30 years, as well as giving years of service to Northrop Grumman before retiring. He currently serves as chief of operations for The Leadership Compass.

According to Georgia Tech, Jones and Roger Krone join more than 100 new members in the NAE.

“We are proud of aerospace engineering alumni Christopher Jones and Roger Krone, for their impressive contributions to industry and government,” said Raheem Beyah, dean and Southern Company chair of the College of Engineering at Georgia Tech,  in a congratulatory statement on the Georgia Tech faculty members and alumni elected to the National Academy of Engineering (NAE). “Their induction into the Academy for technical leadership in industry engineering puts into practice the academic rigor of the College, acknowledging the impact that our engineers have on government and commercial enterprise.”

Roger Krone is chairman and CEO of Leidos, a Fortune 500 information technology, engineering, and science solutions and services leader that hires at the BEYA STEM Conference and has nominated several Leidos engineers for prestigious awards.

Before being named CEO in July 2014, Krone held leadership roles in aerospace for nearly 40 years. Bringing both engineering and financial expertise to bear, Krone has held senior program management and finance positions at The Boeing Company, McDonnell Douglas Corp., and General Dynamics. He is widely recognized as a dynamic thought leader with an intense interest in technology.