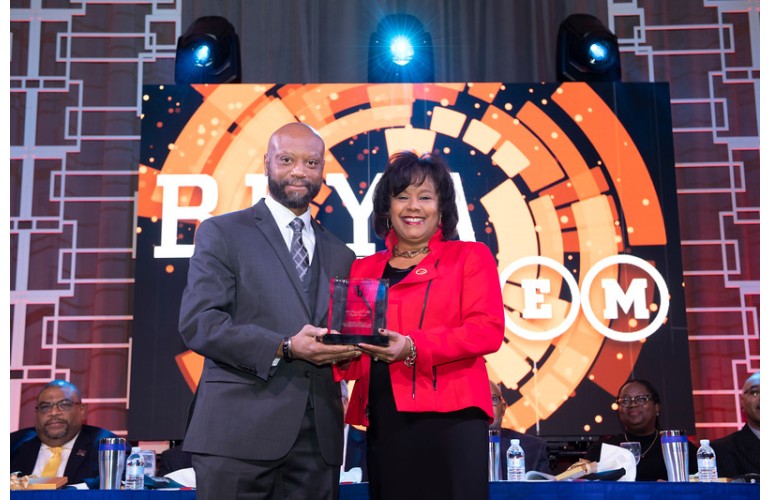 The Stephanie C. Hill Legacy Award is named for the 2014 Black Engineer of the Year, seen here presenting the 2020 legacy award at the BEYA Conference in February. Hill is also one of three executive management changes that were announced this week as Lockheed Martin’s venerable CEO Marillyn Hewson named a successor of the aerospace and defense manufacturing company.

Hewson, who has been a prominent leader at BEYA since stepping into her role in 2013, will be succeeded by  James D. Taiclet, who began his career as a United States Air Force officer and pilot and served a tour of duty in the Gulf War. Taiclet’s appointment will be effective on June 15.

“Thomas Lloyd Peeples, Jr. has been at the Goodyear Tire and Rubber Company in various engineering, product development, and management roles for the last two decades,” Hill said at the BEYA event in February. “He holds multiple tire design patents and has developed Large Earthmover tires, passenger and light truck tires, and leads a team developing aviation tires. Prior to Goodyear, Lieutenant Peeples served as Surface Warfare Officer in the United States Navy.”

Peeples, who is the current president of the Goodyear Veterans Association, spoke of his gratitude to those who had come before him.

“I have reached the heights of my journey so far, because I stand on the shoulders of giants, like Benjamin Banneker, Charles Drew, George Washington Carver, Edward Bouchet, and many others who, despite extremely difficult odds, opened the door for Black engineers,” he said. “I also owe much of my success to the positive, supportive people in my life who are my village, encouraging me to succeed. My parents always told me to dream big. And the belief in me by my wife and children, extended family, coaches, teachers and professors, friends and professional peers brought me to this point.”