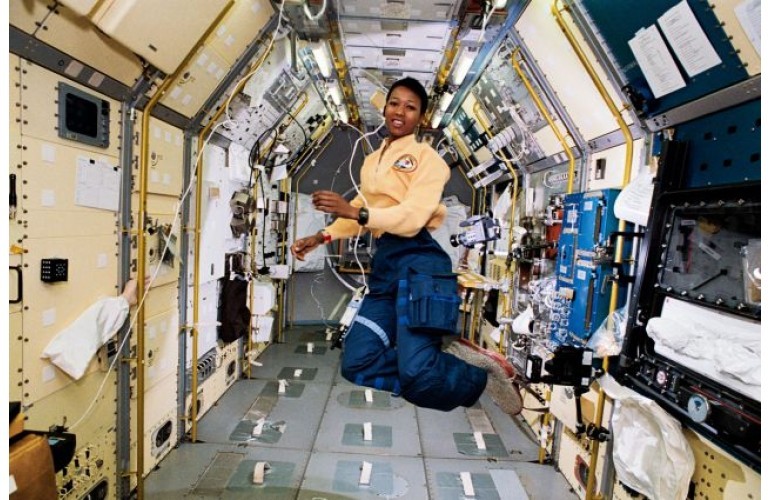 Growing up, Mae Jemison was just like every other kid. The starry night sky stimulated her interest in science, technology, engineering, and math (STEM).

“I loved space, stars, and dinosaurs,” she said. “At the time of the Apollo, everybody was thrilled about space, but I remember being irritated that there were no women astronauts. People tried to explain that to me, and I did not buy it.”

In June 1987, Jemison broke through the glass ceiling when NASA selected her for astronaut training. She was the first black woman in the program. Five years later, Jemison made history again as the first African American woman in space. After her successful mission,  she left NASA to start up a company researching the application of technology to daily life. But Jemison hasn’t hung up her spacesuit. A lifelong explorer, she’d go to space again if there were a mission to Mars.

“I’d also love to go to a completely different planetary system out of our solar system,” the former NASA astronaut said.

Jemison is the current principal of the 100 Year Starship. The organization hopes to go beyond the far side of the Moon and make human interstellar travel a reality within the next 100 years.

Born in Decatur, Alabama, Mae Carol is the youngest child of Charlie Jemison, a roofer, and carpenter, and Dorothy (Green) Jemison, a schoolteacher. Her sister, Ada, became a child psychiatrist, and her brother, Charles, is a real estate broker. The family moved to Chicago, Illinois, when Jemison was three years old.

At the age of 11, Jemison began dancing because she wanted to become a professional dancer. Three years later, she auditioned for the role of “Maria” in West Side Story. She did not get the part, but Jemison’s dancing skills did get her into the lineup as a dancer. Jemison also spent a lot of time in her school library reading about science, especially astronomy.

When she graduated from Chicago’s Morgan Park High School in 1973 as an honor student, she entered Stanford University on a National Achievement Scholarship at the age of 16.

“It’s not until recently that I realized that 16 was particularly young or that there were even any issues associated with my parents having enough confidence in me to [allow me to] go that far away from home,” she said.

At Stanford, she choreographed a musical and dance production. She also served as head of the Black Students Union. Majoring in engineering as a black woman was difficult, though because race was always an issue.

“Some professors would pretend I wasn’t there,” she said. “I would ask a question, and a professor would act as if it was just so dumb, the dumbest question he had ever heard. Then, when a white guy would ask the same question, the professor would say, ‘That’s a very astute observation.'”

In 1977, Jemison graduated from Stanford with a bachelor’s degree in chemical engineering, and a B.A. in African and Afro-American Studies. During her senior year in college, when she was trying to decide whether to go to medical school or become a dancer, her mother gave her this advice: “You can always dance if you’re a doctor, but you can’t doctor if you’re a dancer.” By 1981, she had earned a Doctor of Medicine degree at Cornell Medical College. Jemison also took lessons in modern dance at the Alvin Ailey school at Cornell.

During medical school, Jemison traveled to Cuba, Kenya, and Thailand to provide primary medical care to local people. After completing her medical training, Jemison joined the Peace Corps and served as a Peace Corps Medical Officer from 1983 to 1985 responsible for the health of Peace Corps Volunteers serving in Liberia and Sierra Leone. Jemison’s work in the Peace Corps included supervising the pharmacy, laboratory, and medical staff as well as providing medical care, and developing and implementing guidelines for health and safety issues. Jemison worked with the Center for Disease Control, helping with research for various vaccines.

NASA selected Jemison for astronaut training in June 1987. Her first mission was in 1992 aboard the Space Shuttle Endeavour. She now works on projects to advance technology in developing countries. Jemison has appeared on television several times, including as an actress in an episode of Star Trek: The Next Generation.