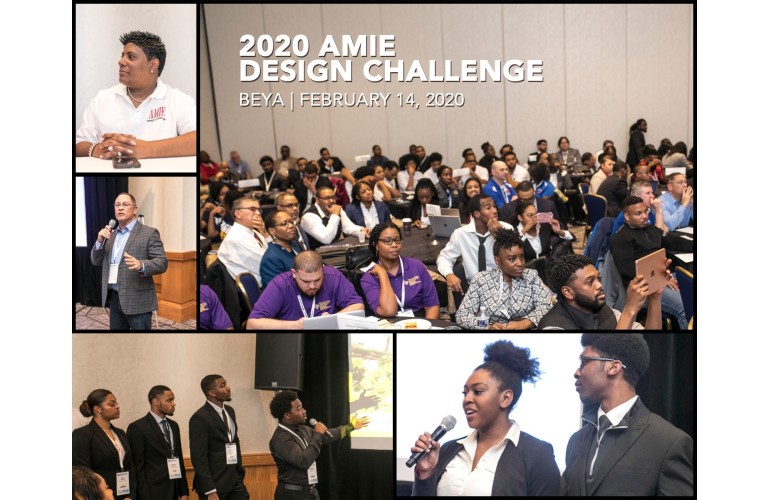 The third annual AMIE Design Challenge presentation was held at the 2020 Black Engineer of the Year Awards (BEYA) in Washington DC on Friday, February 14. The two-hour program was one of the many events that ran alongside the 34th Annual BEYA STEM Conference.

The Advancing Minorities’ Interest in Engineering organization, or AMIE, which is made up of the
15-member Council of Engineering Deans of the Historically Black Colleges and Universities (co-hosts of the BEYA Conference) aims to strengthen science, technology, engineering, and math (STEM) outreach in local communities and ABET-accredited engineering programs at historically black colleges and universities (HBCUs).

“Our students continue to win because they display the technical skills and the character instilled in them at Hampton University,” Dean of the School of Engineering and Technology, Dr. Joyce Shirazi in a statement. “They worked closely with their faculty advisor, Dr. Jerald Dumas, as well as their Net App advisors, Mr. Rodney Scurlock and Mr. Joseph Brown. Moreover, they convened several times per week over a three-week period to perfect the accuracy of their design. Lastly, they had the confidence to convey it to the judges and the crowd of hundreds in Washington, D.C.”

In addition to winning the top award, Hampton University’s School of Engineering and Technology students attended IBM training in design, test and development applications or “apps” over a three-week period. The School of Engineering and Technology also received a monetary prize that will assist in retention programs as well as a monetary award to each student team member.

The Hampton University Engineering Design Team developed an app program — using IBM Watson software — called ColorSphere that promoted and assisted students in a search for employment. ColorSphere provided an optimal match for student applicants and potential employers. Dr. Nellone Reid (’08) was the team’s faculty advisor and Mr. Brandon Diggs (’13) from Corning Incorporated was the team’s corporate mentor. Teams were judged based on design, prototype, and presentation.

AMIE’s mission is to attract, educate, graduate and place minority students in engineering and computer science careers. The AMIE Design Challenge winners (Hampton University students) got to present at the annual conference.