Another day, Another data breach 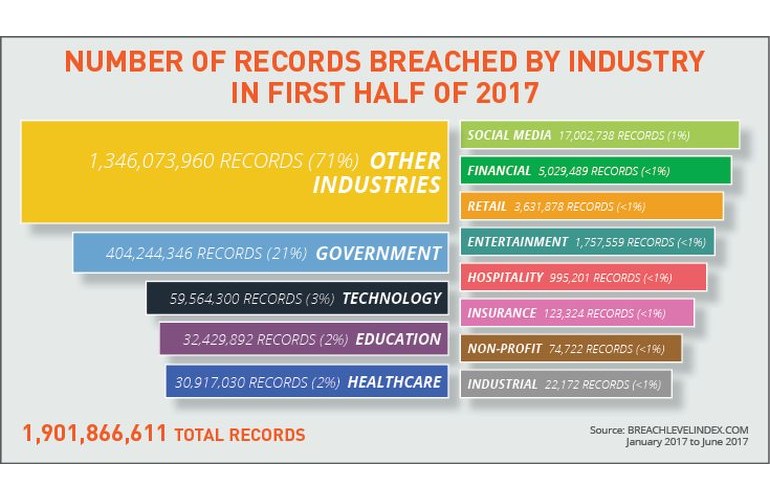 At that time, Yahoo disclosed that more than one billion of the approximately three billion accounts had likely been affected.

The Breach Level Index not only tracks publicly disclosed breaches but also allows organizations to do their own risk assessment.

“Breaches are no longer a binary proposition where an organization either has or hasn’t been breached. Instead, they are wildly variable — having varying degrees of fallout — from breaches compromising entire global networks of highly sensitive data to others having little to no impact whatsoever,” Breach Level Index says in its new report Poor Internal Security Practices Take a Toll in First Half of 2017.

The analysis of security breaches, conducted by Gemalto through data collected in its Breach Level Index, shows that some 1.9 billion data records were lost or stolen during the first half of 2017, compared with 721 million during the previous six months, an increase of 164%.

Data Records are lost or stolen at the following frequency

The report looks at the data in terms of the number of breaches, the number of data records lost or stolen, and data breaches by the source of the breach, type of breach, industry, and country or region.

During the first half of 2017, there were 918 data breaches worldwide, compared with 815 in the last six months of 2016. That represents a 13% increase. Of these, identity theft accounted for three quarters of data breaches, an increase of 49% compared to the previous six months.

BLI industry breach details show that healthcare was the hardest hit sector in 2017 so far in terms of the number breaches. The industry experienced 228 breaches (25% of the total), similar to the previous six months. Some 31 million records were stolen, accounting for 2% of the total and up 423% from just 6 million.

Always a popular target for cybercriminals, the financial services industry suffered 125 data breaches, 14% of the total and up 29% from the previous six months.

Data breaches in various other industries totaled 53, up 13% and accounting for 6% of the total.

The number of records involved in these attacks was a staggering 1.34 billion (71% of the total) and significantly up from 14 million.

‘Accidental loss the biggest source of lost or stolen records’

According to the BLI, malicious outsiders were the leading source of data breaches in the first half of 2017, and accidental loss was the biggest source of lost or stolen records. Identity theft was once again the most common type of breach. In terms of geography, North America easily had the largest numbers of disclosed breaches during the first half of the year.

Gemalto is a  leader in digital security, helping the largest and most respected brands protect their data, identities, and intellectual property.

“In this fast-moving mobile and digital environment, we enable companies and organizations to offer a  range of  services to billions of individuals by securing financial transactions, mobile services, public and private clouds, eHealthcare systems, eGovernment services, and the Internet of Things (IoT),” Gemalto says on its website.