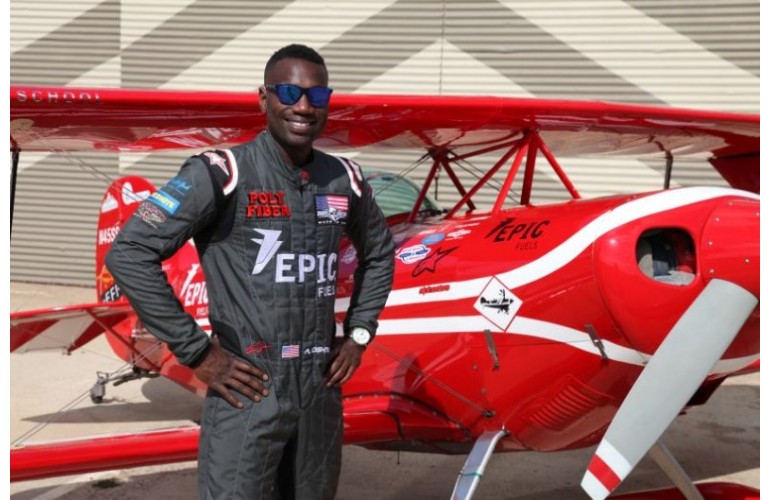 Anthony Oshinuga has been dubbed the aerobatic pilot who never gives up.  He’s come a long way since his dreams first took flight. Now, he has his sights set on Arctic Thunder.

On June 30, Anthony plans to fly his red and white Pitts Special in the air show hosted by Joint Base Elmendorf-Richardson. The base is home to military aircraft platforms that deploy troops and all types of cargo to bases around the world. The annual open house has been held since 1990.

At this year’s Arctic Thunder, Anthony will be entertaining crowds alongside military demonstrations as well as eight civilian and war-bird demonstrations.

Going by his past accomplishments in aerial displays, Anthony appears on course to make his mark.

At the 2014 U.S. National Aerobatic Competition he placed fourth out of nine competitors in his category and 25th overall in the total contest.

A year later, he was the first African-American rookie pilot to hold a first-place position after his 3rd heat at the Reno National Championship Air Race. This outstanding achievement allowed him to place 2nd in the overall competition.

Since 2016, EPIC Fuels, a global supplier of fuels and services to airlines, airports, and the U.S. Defense Logistics Agency, has sponsored Anthony.

A University of California, Riverside alum, Anthony graduated with a degree in mechanical engineering in 2006. He went on to earn a private pilot certificate and took aerobatic lessons, all while working in pharmaceutical jobs to pay the bills.

Last January he told Thomas Haines in an interview for the Aircraft Owners and Pilots Association that every pilot has goals in aviation.

“Whether it’s to fly to new and fun destinations, become a commercial pilot, or just excel as an aviator. I personally feel that anything you authentically apply your passion towards will bear fruit; you’ve just got to keep your eyes to the sky,” Anthony said.

For a complete schedule of Anthony’s appearances and a map of his flight path, follow his EPIC Air Adventure to Alaska @EPICFuels and @TeamOshinuga with the hashtag #AOEPICadventure