Armistice 100: Remembering Those Who Served 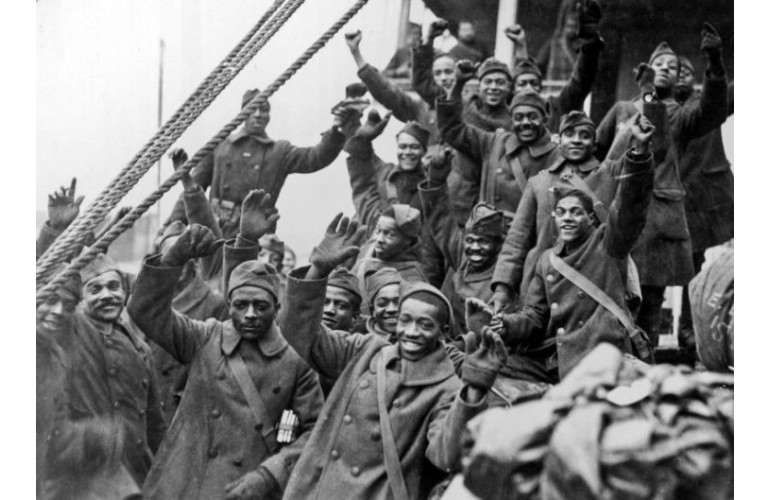 Many organizations across America are celebrating the 100th anniversary of the end of World War 1. Seattle’s Museum of History and Industry is marking Armistice Day with a Centennial Commemoration Weekend, November 10—12, 2018.

On November 11, the museum’s Armistice Day program remembered those who served at the Boeing Centennial Terrace. A WW1 America exhibit also tells the extraordinary stories of Americans–both legendary and unsung–during this turbulent time in history.

According to World War I and Postwar Society, more than 350,000 African Americans served in segregated units during World War I.

Several units saw action alongside French soldiers fighting against the Germans, and 171 African Americans were awarded the French Legion of Honor.

African-American soldiers provided much support overseas to the European Allies, says an online exhibit by the Delaware Division of Historical and Cultural Affairs.

“Those in black units who served in engineer service battalions were the first to arrive in France in 1917, and in early 1918, the 369th United States Infantry, a regiment of African-American combat troops, arrived to help the French Army. Earning the reputation from the Germans as “Hell Fighters,” the 369th was nicknamed the “Harlem Hell Fighters” because the regiment “never lost a man through capture, lost a trench or a foot of ground to the enemy.”

In the photo, members of the famed “Harlem Hellfighters” (369th Infantry Regiment), are seen waving from the deck of a ship as they arrive home from their World War I tour of duty (Photo courtesy: Paul Thompson – War Department – National Archives)

During the Second World War, the legendary Daniel “Chappie” James Jr. trained pilots for the all-black 99th Pursuit Squadron.  In 1975, James became the first African American to reach the rank of four-star general. He graduated from Tuskegee University in 1942.

By the end of the war, the Tuskegee Airmen would be credited with 15,500 combat sorties and earn over 150 Distinguished Flying Crosses for their achievements. The successes of the Tuskegee Airmen helped pave the way for the integration of the U.S. armed forces.