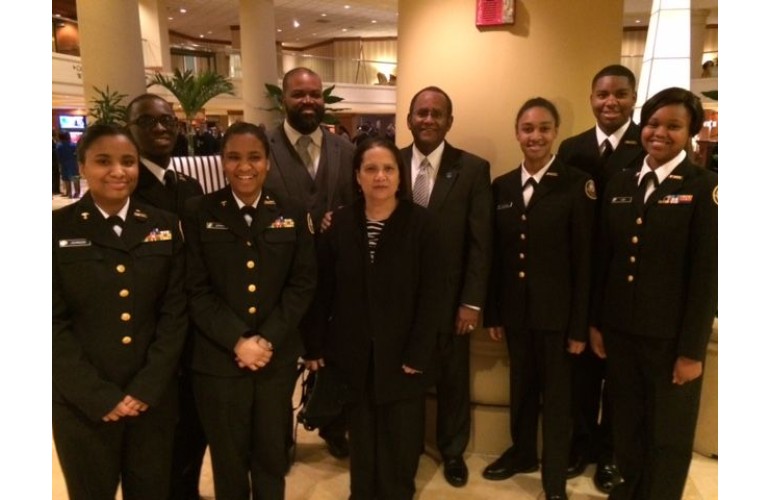 Some lucky STEM (science, technology, engineering, and math) students are getting an education in the art of rubbing elbows through the Sustained Mentoring Program sponsored by the Black Engineer of the Year Award (BEYA) Stars & Stripes organization.

Stars & Stripes is comprised of many of the nation’s leading active duty and retired African-American military flag officers, Department of Defense civilians of the federal Senior Executive Service.

Stars & Stripes members launched the voluntary program of as a two-pilot in October 2014 to provide a six-year mentoring platform for students starting in high school through college and then into an entry-level STEM career.

At the BEYA conference held each February, Stars & Stripes members traditionally mentor students during an afternoon of the event and then invite them to attend the Stars & Stripes gala in the evening.

Vice Adm. (retired) Melvin G. Williams Jr., who serves as co-chair of the Sustained Mentoring Program, said Stars & Stripes saw it as an opportunity to expand the group’s efforts in its mentoring activities during the BEYA conference.

“We saw value in the one-day mentoring session. We wanted to have something that was sustained,” Williams said, then associate provost for military and veterans affairs at the George Washington University (GW) in Washington, D.C.

“Because the STEM field is so challenging, we think that having the mentoring being persistent over that six year period is critical,” he said.

Working closely with students is near and dear to Williams. At GW, he also administered Operation GW VALOR, a program that assists student military members and their families. About 1,700 VALOR students were enrolled at GW during the fall semester 2015, up 70 percent in two years from about 1,000 students enrolled in the fall semester of 2013.

While Stars & Stripes is evaluating the Sustained Mentoring Program as a pilot, Williams said he is already seeing some success. Williams personally is mentoring students at Suitland High School in Suitland, Md., in the Washington, D.C. area. Two of his mentees, who were members of the Navy Junior ROTC program at Suitland, are now pursuing STEM education at Morgan State University in Baltimore and Delaware State University.

“These young people are so excited. They really enjoy what we are doing. They are attentive and they are asking questions. I’m learning from them as much as they are learning from me,” Williams said.

In addition to Suitland, other schools partnering with the Sustained Mentoring Program include Phelps, Bell Multicultural and Ballou high schools in Washington, D.C.; T.C. Williams High School and Thomas Jefferson High School for Science and Technology in in Alexandria, Va.; and George Washington Carver High School in Philadelphia, where the BEYA conference will be held in February 2016.

Clements said he typically brings 15-20 students to the BEYA conference Stars & Stripes mentoring event to interact with active duty military officers. Clements recalls fondly a the 2015 BEYA conference during the Stars & Stripes mentoring session how Vice Adm. Bill Moran, the Navy’s chief of naval personnel, commented that he found a Suitland student attending to be bright and engaging.

“I just observe and say what could my life had been like if someone had been this way with me at the high school level,” Clements said. “To be in that presence and having those discussions at the table and hearing what’s being said, the influence and impact will resonate with (the students).”

Clements said he also welcomes the role Williams plays at Suitland with his students. Mentoring occurs with monthly face-to-face session along with interactions online. Williams also writes college letters of recommendations and invites them to attend BEYA Stars and Stripes Gala during the conference.

On one recent mentoring visit to the school, Williams helped students wit the setting and tracking of goals.