BEYA winner thanks family for inspiring his career success 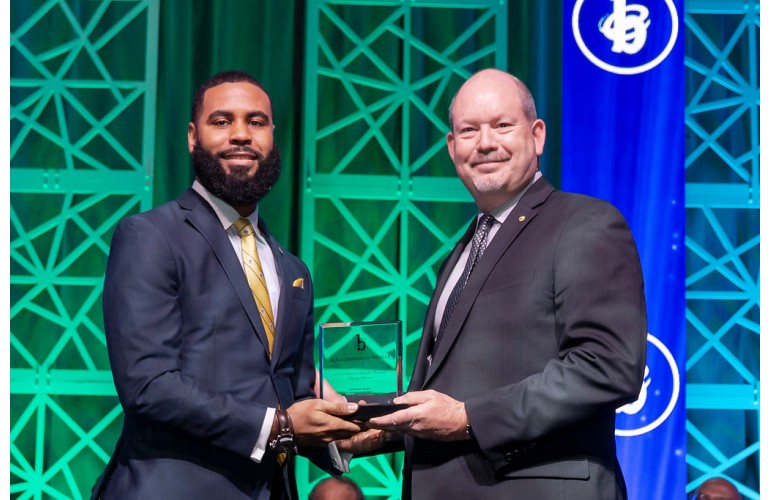 In his acceptance speech at the HBCU Engineering Deans Breakfast, Belton recalled growing up in New York with his grandmother and mother, and how their love, work ethic, and structural support enabled his success.

The Admiral Michelle Howard Legacy award is named in honor of the first woman and first African American, who, in 2014, became a 4-star admiral and vice chief of Naval Operations.

Adm. Howards’ groundbreaking 35-year naval career is marked by firsts, including becoming the first African American woman to command a U.S. Navy ship and the first to achieve two and three-star rank. Howard is a 2008 Women of Color in STEM Career Achievement Award winner and Career Communications Group (CCG) Hall of Fame honoree.

Belton “has taken advantage of vast opportunities provided him by working on different aircraft carrier contracts, where he’s been assigned,” Southall said before he presented the award.

“He’s volunteered his expertise and made an enormous difference in our business. His passion for the craft has been a large element of support for his department and has since landed him the opportunity to lead as a chief test engineer on the newest nuclear aircraft carrier contract at Newport News,” Southall said.

Also a mentor and a coach in his community, Belton was praised for his dedication to young people.

“Who would’ve thought that a young black male from Queens, New York could escape from a path that many fall victim to and become an engineer? Belton asked. “Key to that success is a solid foundation,” he said.

“I grew up in my grandmother’s house surrounded by family. My mom, sister, and I lived in the basement. It seemed as if we didn’t have a lot. But time would tell that family was all I needed. My mom instilled in me the power of a strong education and good choices, and through them, I humbly stand before you as a success story,” Belton said.