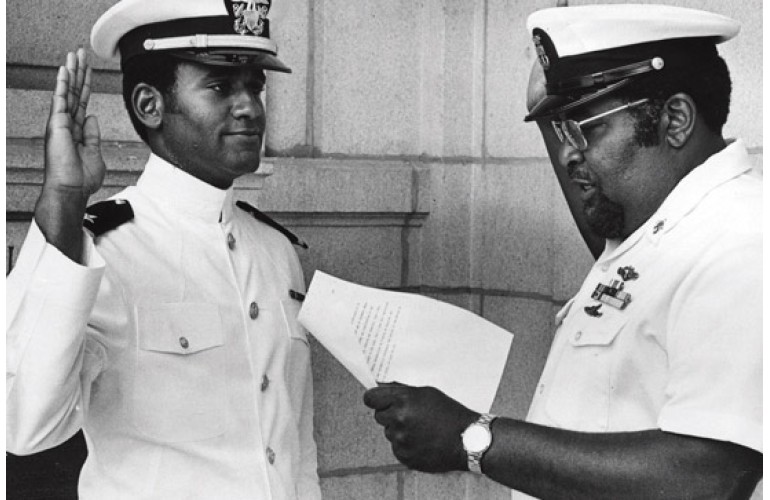 With the fifteenth annual BEYA Stars and Stripes event honoring African American military leaders only 100 days away,  it’s the perfect time to read Navigating the Seven Seas: Leadership Lessons of the First African American Father and Son to Serve at the Top in the U.S. Navy.

Written by retired Vice Adm Melvin Williams (right) and retired Master Chief Melvin Williams seen at the 2009 BEYA Stars and Stripes Dinner, the double biography of this trail-blazing father and son has been in the Chief of Naval Operations (CNO) Professional Reading Program since 2012. The CNO program provides Sailors and Navy personnel recommended reading, which contributes to professional and personal growth.

“I received a phone call from Master Chief Williams (Dad) who ‘ordered’ me to look at the Sunday Washington Post Outlook section,” wrote Vice Adm. Williams in an email. “ We had no idea that our book would make the list. Humbling.”

The collection of life lessons from two generations of submarine sailors cover the ups and downs in the makings of a Command Master Chief and a Flag Officer. The mariners discuss their career highlights and challenges with examples drawn from nearly 60 consecutive years of military service in the United States Navy.

The elder Williams joined the Navy during the Korean War in 1951 and served twenty-seven years before retiring as a Master Chief, a top Enlisted rank. During the early part of his career, Williams advocated for improvements that helped enhance career progression and promotion for African Americans, Filipinos, and majority members in the navy. His assignments included tours in an aircraft carrier, surface ships, submarines, the presidential yacht with presidents Lyndon Johnson and Richard Nixon, and at the Pentagon, where he served as leader of the dining facility for the Secretary of the Navy and Chief of Naval Operations.

As Master Chief, Williams provided enlisted advice to senior Navy leaders and initiated efforts to help ensure equal opportunity for all people serving in the Navy. He received the Stars and Stripes Award for his lifelong contributions to the military at the 2009 Black Engineer of the Year Awards (BEYA) Science, Technology, Engineering and Math (STEM) Conference.

In October 2010, Vice Admiral Mel Williams completed his service in the Navy after thirty-two years as an officer. A 1978 math graduate of the U.S. Naval Academy, Williams went on to earn a master’s degree in engineering from the Catholic University of America. By 1994, he had risen to command a nuclear-powered ballistic missile submarine, the first African American to do so in history. While serving as commanding officer, the team earned a Strategic Performance Award, becoming the first Ohio-class submarine to win the Omaha Trophy for excellence.

Groomed for success, Williams’s Navy service included initial combat operations in Operation Desert Storm, which led to the liberation of Kuwait following a siege by Saddam Hussein, and initial combat operations in Operation Enduring Freedom, the first US-led coalition response following the 9/11 terrorist attacks. He also served as fleet commander of 130 ships and over 90,000 sailors and marines in the US Second Fleet; and held the positions of submarine group commander, submarine squadron Commander, and submarine commander.

Williams is one of the first seven African Americans to command a Navy submarine in the first 100-year history of the Submarine Force. The elite group is known as the U.S. Navy and Submarine Force Centennial Seven, seen in the cover photo.

Williams received the BEYA for Professional Achievement in 1995 as well as induction into the 2011 Hall of Fame for his contributions to STEM education. After the military, the retired admiral served in a Presidential Appointee role at the Department of Energy (2011-2013). He has also served as an associate dean of engineering (Professional Programs) at the Catholic University of America, nuclear research consultant at the University of California – Davis, and associate provost (Military and Veterans Affairs) at the George Washington University.

Navigating the Seven Seas: Leadership Lessons of the First African American Father and Son to Serve at the Top in the U.S. Navy is available in all formats on Amazon.