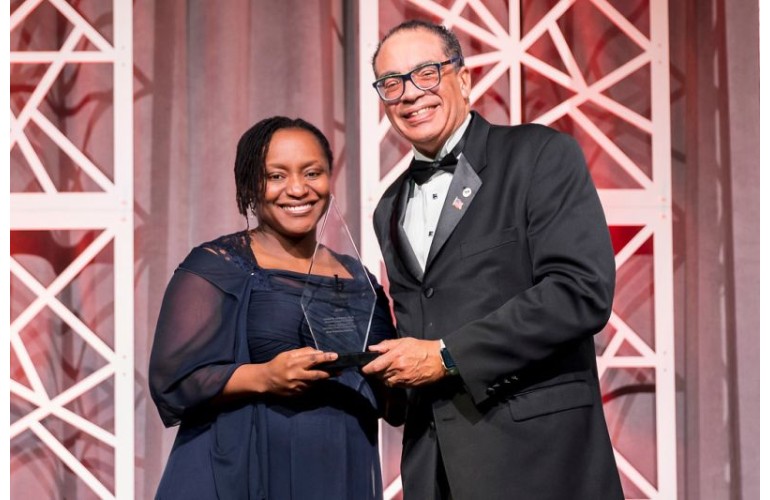 Chemist and change agent Victor McCrary, seen here presenting an award at the 2019 BEYA STEM Conference, is the new vice-chair of the National Science Board (NSB).

McCrary was the business area executive for science & technology at The Johns Hopkins University Applied Physics Laboratory, where he directed internal research and development funding to develop new core competencies and technologies in the areas of national security and space.

He started his career at AT&T Bell Laboratories as a Member of Technical Staff and then as a program manager and division chief at the National Institute of Standards and Technology. McCrary has authored or co-authored over 60 technical papers and co-edited two books in his career. He is a former national president of the National Organization for the Professional Advancement of Black Chemists and Chemical Engineers (NOBCChE) and a Fellow of the American Chemical Society.

Honors include the Most Promising Black Engineer Award at the BEYA STEM Conference in1990 and co-recipient of the U.S. Department of Commerce’s Gold Medal in 2000. In 2005, McCrary was featured in Science Spectrum magazine as one of the Top 50 Minorities in Science and elected to the 2007 DVD Association’s Hall of Fame.

In 2011, he was honored as Scientist of the Year by the BEYA STEM Conference. The Catholic University of America honored him in 2015 with its Alumni Award for Research Excellence and Howard University recognized McCrary with its Distinguished Alumni Award in 2017.

NSB identifies issues critical to NSF’s future and establishes the agency’s policies within the framework of applicable national policies set forth by the President and the Congress. The Board also serves as an independent body of advisors to both the President and the Congress on policy matters related to science and engineering and education in science and engineering. The President appoints NSB’s 24 members—selected for their eminence in research, education, and records of distinguished service—for staggered six-year terms.

Congrats to Dr McCrary on his.. Carl Wheeler, Knoxville TN

Congratulations to Dr. McCrary. Been a long time since we were classmates at DeMatha HS. Proud of all your accomplishments and leader in science that you have become. Well done! Rom

Great to hear from you!! A bunch of us DM guys get together via Zoom, so please send me your contact info!