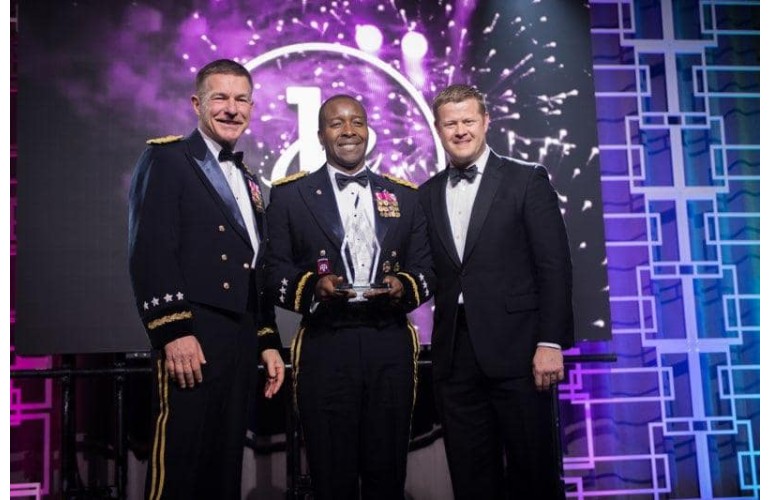 Lieutenant General Bruce T. Crawford received the Black Engineer of the Year Award at the BEYA Gala on Saturday for his outstanding efforts to mentor the next generation of American engineers, technicians, and technologists. Over the last 34 years, the BEYA Conference has exposed more than 100,000 students to role models in science, technology, engineering, and math (STEM) careers.

The Office of the Army Chief Information Officer/G-6 posted photos taken at the event on their Facebook page. The caption reads:

The 24th Secretary of the Army Ryan D. McCarthy and the 40th Chief of Staff of the Army Gen. James C. McConville present Lt. Gen. Bruce T. Crawford, Army Chief Information Officer with the 2020 Black Engineer of the Year Award for his outstanding efforts to mentor the next generation of American scientists, technologists, and engineers during the 34th annual BEYA awards gala in Washington D.C.

The 2014 photo shows Crawford, as commanding general, U.S. Army Communications-Electronic Command, discussing the future with students during a mentoring session at the 31st annual Black Engineer of the Year Awards Conference.

During the BEYA 2020 event, Lt. Gen. Bruce Crawford participated in a panel focused on cybersecurity and mobility. He spoke about reimagining the tech workforce of the future, risk management framework reform, and data migration efforts.

The event-packed three-day event unites thousands of students, college representatives, professionals, and leaders in science, technology, engineering, and math (STEM). The agenda includes seminars and workshops, networking opportunities, and the conference’s popular career fair, which provides access to leading employers. Also included on the agenda is the Black Engineer of the Year Awards ceremony recognizing notable achievements and accomplishments in STEM.

The three-star Army general becomes one of a select number of active-duty officers to be named Black Engineer of the Year since 1987. Uniformed officers who have received the prestigious engineering award during Black History Month include Captain Donnie Cochran (1989), Lt. Gen. Albert J. Edmonds (1996), and  Lt. Gen.  Joe N. Ballard  (1998).  See the full list of Black Engineers of the Year here.