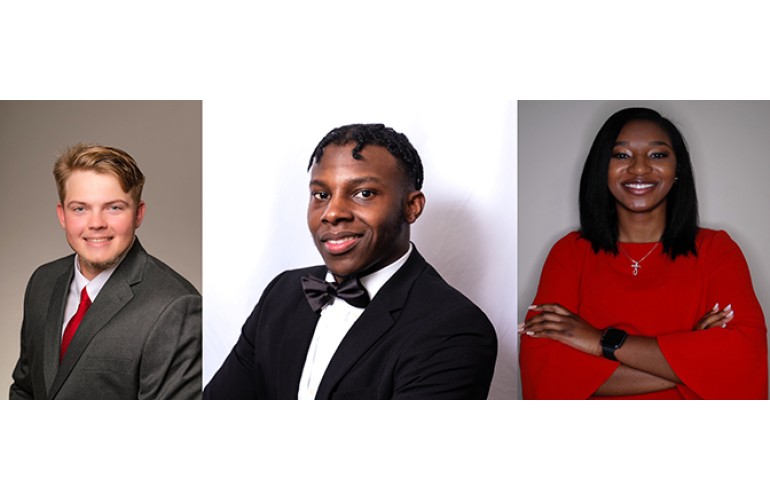 The annual BEYA STEM Conference celebrates students who are not only excelling academically but using their talents to serve their local communities. The 2022 winners of the BEYA Student Leadership Award embody dedication and hard work and make a great impact in the science, technology, engineering, and math (STEM) universe. Read more about these trailblazers in the upcoming edition of US Black Engineer magazine.

Shaniah Reece is a junior at the University of Maryland, Baltimore County (UMBC), with a GPA of 3.38. She began her college education with aspirations of becoming a physicist until she joined UMBC’s Center for Women in Technology (CWIT). The organization offers students leadership experiences and professional development opportunities. After graduating, Shaniah hopes to attend graduate school. She said she enjoyed all the activities and networking opportunities at the 2022 BEYA STEM Conference. “The combination of insights, experiences, and stories shared in one space was inspiring,” Reece said. “If you are interested in attending, do not hesitate.”

Oreoluwa Adediwura studies mechanical engineering at Texas A&M University, Kingsville. He is currently enrolled in a master’s degree program. His BEYA experience was also successful, with an internship offer from Boston Scientific as an R&D engineering intern. He had valuable conversations with company representatives about current trends and got valuable career advice.

Tarami Readus is in the electrical engineering program at the University of Houston. Since his first year, he has been active in student organizations on campus, including the National Society of Black Engineers (NSBE), the National Action Council for Minority Engineers (NACME), and a graduate engineering Studies program. He is enthusiastic about the intersection between technology and business and aspires to be a product manager.

Kiara Chambers served as a student ambassador for Norfolk State University and received a scholarship from the Dozoretz National Institute for Mathematics and Applied Sciences, which addresses the shortage of minority scientists by producing graduates in the basic and applied sciences. Chambers recently established the Beverly Ann Chambers–Witchard Memorial Scholarship in honor of her grandmother.

Alexis Robinson majors in engineering at Norfolk State. She is an active participant in the Society of Optical Engineering (SPIE) student chapter and a leader on the NSU softball team. Robinson was selected as a Virginia Aerospace Business Association scholarship recipient in fall 2021 and was also a Mid-Eastern Athletic Conference (MEAC) scholar-athlete of the month in 2021. In February 2022, Robinson pitched the first no-hitter for the Lady Spartans since 2006. Robinson plans to pursue graduate engineering coursework and work in research and development.

Aniya Brown is a computer science major and a Dozoretz National Institute for Mathematics and Applied Sciences Scholar. She is also a math tutor, a Microsoft student ambassador, and a Norfolk State University SU Netflix/2U Scholar. Additionally, she was a Thurgood Marshall College Fund (TMCF) Leadership Institute & Central Intelligence Agency immersion scholar. During the last three summers, she has been an intern for the Department of Defense and a software engineering intern at Microsoft.

Emmanuel Elom is currently pursuing a master’s degree in computer science, focusing on data management and analytics. He also has a diploma and bachelor’s degree in computer science and relevant certifications. “I commend the BEYA Conference organizers for creating such a great platform. We enjoyed every bit of it, connected with the right people, and I’m 100% sure that the BEYA virtual event is second to none,” Elom said.

Shadane Ferraro is a business graduate student at George Washington University. Her first BEYA experience was quite inspiring. Ferraro served as a motivational speaker for high school students at the 2022 BEYA Conference. “The premise of my speech was on being away from home and how to manage oneself and stay motivated throughout their university journey,” Ferraro said. “My key point was to get a mentor, someone already doing the things they wish to do, or someone who has already done it,” Ferraro said.

Khalfani Hargrow is a Coast Guard Academy cadet.  He is an electrical engineering major. Outside of academics, he serves as the regimental chief of staff, the third-highest cadet leadership position. “It is awesome to watch members’ discipline and dedication directly translate into them becoming stronger and more confident,” Hargrow said.

Vivine Ishimwe, an international cadet from Rwanda, has authored several research papers, including “The Impacts of Health Information Being Shared on Social Media Platforms by Healthcare Providers.”  She also authored a paper called “Cyber Incidents Affecting Healthcare and Public Health Sector,” where she did a situational assessment of how cyber incidents affected a hospital. Currently, she and three other cadets are building an image recognition application to identify military insignias on buildings and vehicles. She is also pursuing research in one of the maritime cybersecurity topics, where she will be researching how cybercriminals exploit maritime cybersecurity vulnerabilities.

Jared Davis knew that he wanted to pursue engineering by the time he was in high school. Davis’s fascination with vehicles narrowed his interest to mechanical engineering.

Khalel Drew Robinson is a third-year student at Virginia State University (VSU) pursuing a B.S. in mechanical engineering technology. He is a member of the Honors College and recognized as a VSU STEAM scholar for his continuous outstanding academic achievements.
Robinson has also interned with the Commonwealth Center for Advanced Manufacturing (CCAM). On-campus, Robinson has participated in many leadership activities, including being a department ambassador, parliamentarian, and treasurer of the VSU chapter of the National Society of Black Engineers (NSBE); historian of the Beta Gamma Chapter of Alpha Phi Alpha Fraternity, Inc.; and the chair of the VSU chapter of the Society of Automotive Engineers (SAE).

James “Dylan” Hall received the Student-Athlete Award at the BEYA STEM Conference.  He is a junior at Alabama A&M University studying mechanical engineering specializing in propulsions and computer science. He chose engineering because he has always been interested in science and math. On top of excelling in these subjects, Hall learned that he likes to build things. Although the classes have proved difficult, Hall has fully embraced this career path.

Jarvis Prewitt is also a mechanical engineering major at Alabama A&M University. He hopes to be on the front lines to serve the community where he once lived in Birmingham, AL.  He is the recipient of the Student Academic Award

Kailyn S. Haye began her studies in the fall of 2020 as a presidential scholar and dual computer engineering and mathematics major. She has become a successful and active member of the Honors Program and VSU. Haye has served on the Honors Student Council. She has assisted in organizing programming to increase student engagement, including the Honors Book Club and the mid-term essential study kits. She was also a member of VSU’s Honda Campus All-Stars. In addition, Haye is involved through participation in the National Society of Black Engineers (NSBE). Her faculty reference described her as having “excellent leadership skills and taking the initiative to be very helpful to other students and her professors.”