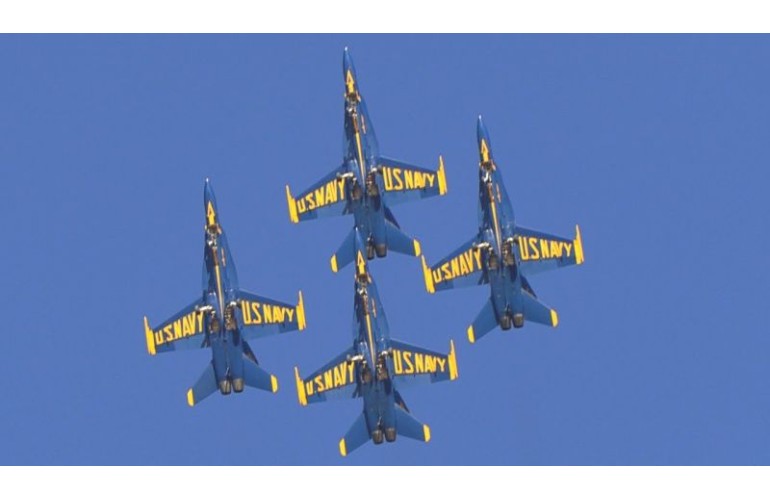 The Blue Angels performed above the Severn River, Tuesday, May 22, and Wednesday, May 23, at 2 p.m. as part of the U.S. Naval Academy’s 2018 Graduation and Commissioning Week.

The audience saw the graceful maneuvers of the four-jet Diamond Formation, in concert with the fast-paced, high-performance maneuvers of the two Solo pilots. The team concluded the demonstration with a performance of maneuvers together in the well-known Delta formation.

Two Naval Academy graduates were part of the Blue Angels team. Lt. Andre Webb is a graduate of the Class of 2008 and will be the show’s narrator and Cmdr. Matt Kaslik, Class of 1995, is the team’s executive officer.

Did you know the 1989 Black Engineer of the Year was the first African American to fly in the Blue Angels formation?

He completed 570 carrier landings and was awarded the Meritorious Service Medal, the Air Medal, and the Navy Commendation Medal, among numerous other awards.

“I think about 70 percent of all Naval tactical aviators who fly off ships could be trained to do what we do,” Cochran told US Black Engineer & Information Technology magazine. “It says a lot about the way the Navy trains pilots.”

The Blue Angels are the U.S. Navy’s Flight Demonstration Squadron and fly a team of six Navy F/A-18 Hornets. The team performed a variety of high-speed, aerobatic, precision-maneuvers during their approximately 45-minutes long air show at the Naval Academy.