How do you celebrate 25 years in Army Science and Technology? 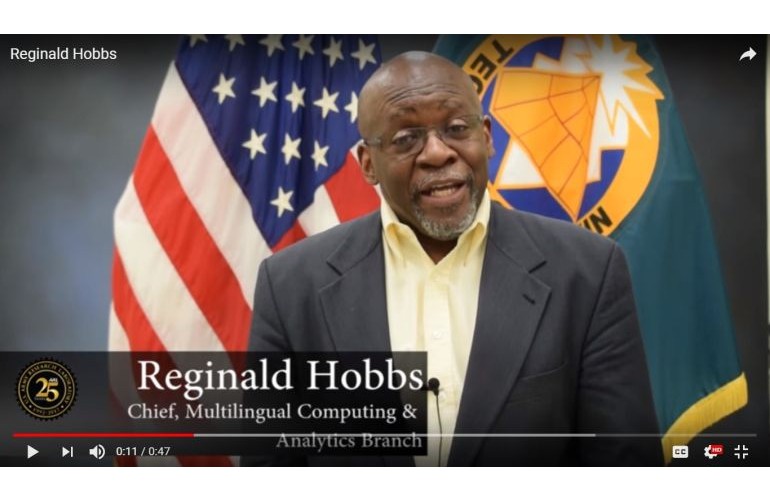 At the Defense & National Security Innovation Summit, scheduled for September 12-13, 2017 in Norfolk, Virginia, the work of scientists and engineers at the United States Army Research Laboratory (ARL) will be on display at the expo featuring the most innovative solutions for the U.S. Department of Defense and national security agencies.

Dr. Reginald L. Hobbs is one of the more than 2,500 scientists and engineers at the Army Research Laboratory part of the U.S. Army Research, Development and Engineering Command, which provides research, development, and engineering to support the Pentagon; Army, Navy, and Air Force.

Dr. Hobbs is chief of ARL’s Multilingual Computing and Analytic Branch. Here’s how he describes his branch and their jobs.

Who works in the Multilingual Computing Branch?

What do they do?

Most recently, Dr. Hobbs has been involved in the Computational and Information Sciences Directorate’s (CISD) development of a system that uses intelligent agents for improving quality of information across social, information and communication networks.

The CISD is an Army organization for basic and applied research in information sciences, network sciences, battlefield environment, and advanced computing and computational sciences to provide the War fighter with knowledge superiority and to ensure U.S. military superiority.

In 2015, Dr. Hobbs was recognized with the Professional Achievement award for his accomplishments at the BEYA STEM Awards Conference.

In addition to his accomplishments in Army science and engineering, Hobbs has served as an adjunct professor at historically black colleges and universities for more than 20 years, including a ten-year stretch at Spelman College.

At Howard University, he has taught behavior-based robotics programming as a faculty mentor for the Advancing Robotics Teaching for Societal Impact Alliance, a program sponsored by the National Science Foundation.

Recently, ARL researchers teamed up with Howard University computer scientists to probe how cues in ordinary conversation can reveal social meanings important to Soldiers’ situational awareness. These researchers came to ARL to study code-switching and other linguistic cues for the extraction of social content from African Languages and English.

“One of the biggest motivators for encouraging participation in any activity is witnessing the success of someone you identify with in that activity,” Hobbs said on receiving his award. “That is the reason that athletes and entertainers are de facto role models. I would like to think that sharing my achievements as a scientist through this selection for a BEYA STEM award presents another type of person to emulate,” Hobbs stated.

In this Veterans Day YouTube video, Dr. Hobbs talks about how he started off as an Airman in the U.S. Air Force doing Information Systems at Cheyenne Valley,  and how his research at the ARL helps war fighters like his brother who recently retired.

Wonderful goods from you, man. I’ve understand your stuff previous to and you’re just extremely magnificent. I actually like what you have acquired here, really like what you are saying and the way in which you say it. You make it entertaining and you still take care of to keep it wise. I can not wait to read much more from you. This is actually a wonderful web site.

I just want to tell you that I’m new to blogs and seriously enjoyed you’re page. Probably I’m planning to bookmark your blog . You certainly have remarkable stories. Thanks for sharing your web page.