Celebrating One Hundred and Fifty at Morgan State 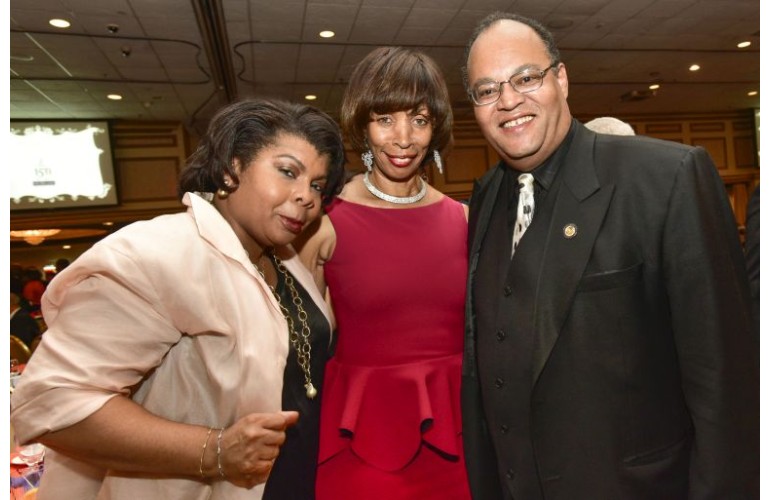 Morgan State University students, faculty, administrators, and alumni brought their good times to the black college’s 150th celebration in Baltimore last Friday. Three events spread throughout the day brought people together for a dedication to last throughout the years.

Taborn, who is the publisher, chairman, and CEO of one of the oldest minority-owned media services company in Baltimore, is a member of the Morgan State University Board of Regents appointed by the Governor of Maryland.

The evening fundraiser dinner, part of the Sesquicentennial Celebration, capped a year-long series of activities and programs, including a combined 150th Anniversary celebration for all nine of the historically black colleges and universities (HBCUs) founded in 1867.

Earlier on Friday, HBCU administrators participated in a Leadership Round-table Discussion, moderated by April Ryan, who was awarded an honorary doctorate from her Alma mater in 2017.

Also on Friday, Morgan State University unveiled its campus memorial to the institution’s athletic greats during a ceremony attended by students, faculty, administrators, and guests, members of Morgan’s Board of Regents, and MSU alumni, including several hall of fame players.

Beginning in 1929, Hurt compiled an incredible record of success as Morgan’s football, basketball and track, and field coach, leading his teams to 33 CIAA championships and, on the gridiron, a 54-game winning streak. Two Pro Football Hall of Famers and an Olympic gold medal winner rose from his ranks. Banks succeeded Hurt as Morgan’s head football coach in 1960 and added his own chapters to the program’s volume on victory. Under Banks, the Bears won five CIAA Championships, went to four bowl games, were unbeaten in three regular seasons and had a 31-game winning streak. They also sent two more NFL players to the Hall of Fame.

Baltimore City Mayor Catherine E. Pugh, a two-time graduate of Morgan and a former cheerleader for the Bears during Coach Banks’ tenure, told the audience about her close relationship with the Banks family and what she

“What cheerleading taught us was leadership skills, camaraderie and how to work together,” Pugh said. “Sports does that for all of us. That’s why we’re so proud of the individuals who will be unveiled here and what they…gave to each and every one of us, as cheerleaders, as sports figures and as those who have gone on to represent Morgan in such a great way.”

George Nock, the sculptor, and designer for Legends Plaza was a starting player on Coach Banks’ Bears from 1965 to 1968 and played four years as a running back in the National Football League. A self-taught and celebrated artist, he is best known for his striking bronze statues of ballplayers, ballerinas, jockeys and jazz musicians. His ability to the capture the versatility and realism of the human form has distinguished him among some of the greatest sculptors of our time.

Nock said he took on the Legends Plaza project as a way to give a gift to “everyone that has gone to Morgan (and) everyone who has known about Morgan or has heard about Coach Banks, Coach Hurt or the legacy of the Morgan Bears. All of these things are what was on my mind to have these people enshrined in bronze.”

The memorial, Legends Plaza, designed and created by the artistic vision of Morgan alumnus George Nock, honors two head coaches who, for more than 40 years, led Morgan scholar-athletes to stellar achievements on and off the field of play.

Morgan State University, founded in 1867, is celebrating its 150th year of excellence in higher education. A Carnegie-classified doctoral research institution, Morgan offers more than 100 academic programs leading to degrees from the baccalaureate to the doctorate.

As Maryland’s designated Public Urban Research University, Morgan serves a multi-ethnic and multi-racial student body and seeks to ensure that the doors of higher education are opened as wide as possible to as many as possible. For more information about Morgan State University, visit www.morgan.edu