Congratulations to the 2020 Graduates in Engineering 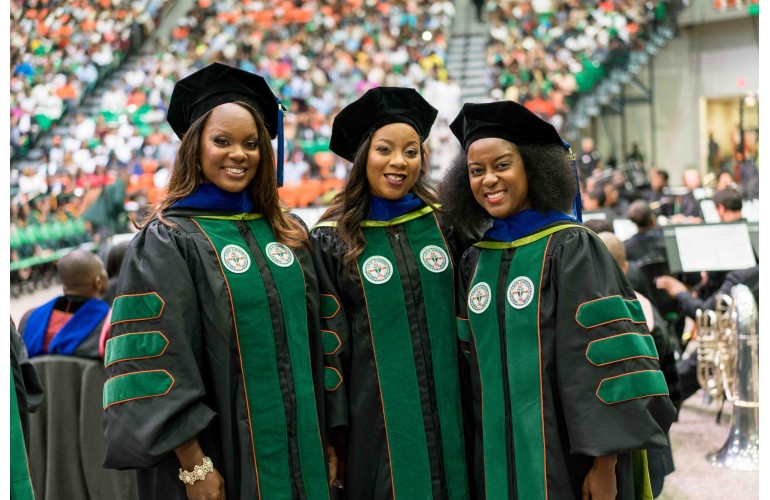 Three Florida A&M University (FAMU) students made headlines in the spring of 2017 when they earned their PhDs in engineering. This year, it is Korie Grayson, also known as @teamkorie on Instagram,  who is influencing the younger generation on social media and the wider audience with the “Wipe It Down” video trend which was first posted by a TikTok user.

With the tune of “Wipe It Down” by BMW Kenny playing in the background, Korie first appears in a black teeshirt spraying down a mirror with a cleaning liquid. As she wipes, we see Korie transform from loungewear into a white dress and an 8-sided doctoral tam, with a gold bullion tassel on her head. In the next frame, and after the last wipe, she’s robed in a  prestigious red academic gown with black and white yoke panels.

“This morning, I was supposed to walk across the stage and graduate from my Ph.D. program in Biomedical Engineering at Cornell University,” she wrote on Instagram.  “COVID-19 prevented that,” she continued, “but I’m gonna wear this well-earned robe and cap no matter what! #wipeitdownchallenge. Doctor Grayson loaded. #classof2020.”

Dr. Grayson has reportedly joined more than 120,000 people who have recreated the original “Wipe” video in their own way. On May 15, she told her followers about the joy of successfully defending her thesis titled the ‘Cellular delivery of TRAIL to treat metastatic castration-resistant prostate cancer.’

“This degree was not easy to get,” wrote the Norfolk State University alumna. “But man I have learned so much in the process, not only about my work but also myself as well.”

A first-generation student who majored in chemistry at the historically black college in Norfolk, Virginia, Korie said she had no real plan when she graduated from Norfolk State. While working in retail to get by, she took the medical college test (MCAT) twice and didn’t get into any MD/Ph.D. program before she decided to go to grad school. Korie was rejected by all the grad schools she applied to, except one.

Korie’s parents are Army veterans. She also has an older brother and three younger sisters who she said are constantly pushing her to do better. “My parents may not have Bachelor degrees but they are some of the smartest and hardworking people I know,” she said. “This Ph.D. is for them! And yes I defended at home with sneakers on…I got to be comfortable.
.

“Rona may have taken my public defense away, but it did not take away this Ph.D. degree, ” Grayson added. “It was great seeing everyone’s faces on @zoom_video_communications, and their love and support in the chat. I got emotional at the end because I truly am grateful and blessed to receive this honor, and have such a tremendous support system behind me. From my family to the Cornell staff and to my committee, it has been nothing but sincere and pure genuine championing from all sides. My mother even surprised me and drove across the country for my defense!”