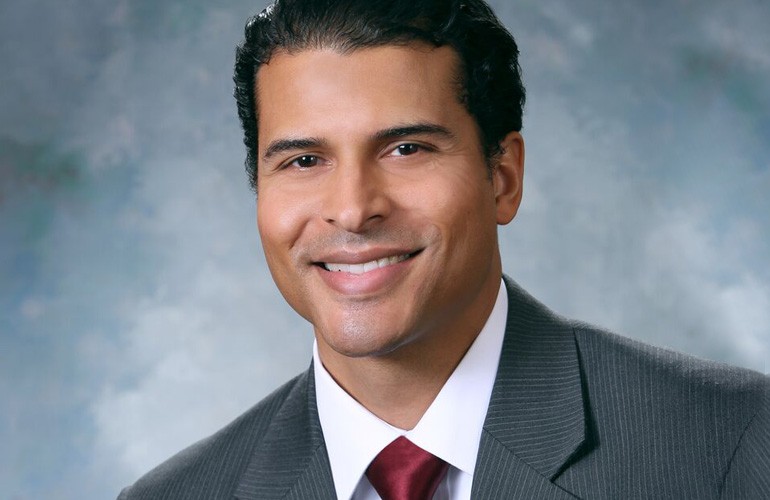 The Sandia National Laboratories is one of two major U.S. Department of Energy research and development national laboratories. In 2016, Sandia’s workforce totaled 12,206 people. This is the story of what one Sandian  is doing to tackle the grand scientific  and engineering challenges of the 21st century.

Conrad D. James grew up in Columbus, Ohio. While in high school at Walnut Ridge, he worked as a research aide in pediatric surgery at Columbus Children’s Hospital. The young scholar went on to publish a journal article on his work with computed tomography as a diagnostic tool in treating hemophiliac children with head injuries.

During three summers while attending college, he interned at Abbott Laboratories, working in the quality assurance, electrical engineering, and computer-aided drawing departments. Prior to beginning his graduate studies at Cornell University in 1996, Conrad spent a summer at Corning Inc. as an intern in the optoelectronics department.

While in graduate school, Conrad published journal articles on micro fabricated cell guidance cues, neural engineering, and extracellular voltage/electrochemical recordings from living cells. He earned both his M.S. and Ph.D. degrees in applied and engineering physics in 1999 and 2002, respectively.

In 2002, he was hired as a Senior Member of Technical Staff at Sandia National Laboratories. Four years later he was promoted Principal Member of Technical Staff. His research interests include electro kinetic phenomena, neural engineering, and biomedical microfluidic devices for measuring immune response. Currently, he holds six U.S. patents and is the author of 28 journal articles and book chapters.

The technical challenges are so significant and the potential impact is so widespread that Sandia has recognized this effort as one of the grand challenges fostering innovation to solve key global health and development problems. As  project leader, Dr. James guides the work of 30 scientists and engineers and is responsible for a $15 million budget. Prior to this project, he led the effort to develop a medical diagnostic sensor that has the potential to identify a range of infectious and chronic diseases from a drop of blood.

After moving to Albuquerque to work at Sandia National Laboratories, he served as an instructor for the Hands-on Minds-on Technology Summer Science program, a Sandia-sponsored effort focused on introducing junior high and high school students to numerous science and technology fields such as forensics, computer programming, and electrical engineering.

Through this program, Dr. James taught a course on standardized test preparation (SAT, ACT) to high school students, and recently taught a course to junior high students on math concepts such as algebra, logic puzzles, and probability.

In addition , he now serves his community as a representative in the New Mexico State Legislature. He ran for, and was elected, to the state legislature in November 2010 and again in November 2014. From 2013 through 2014, he served as a member of the University Of New Mexico Board Of Regents, by appointment of the governor of New Mexico. Dr. James maintains his scientific career at Sandia while working on behalf of his community.

Throughout his career, Conrad has been involved in helping young children become interested in math and science, and helping older students prepare for college entrance exams to achieve success in college.

As an undergraduate at Notre Dame, he was a calculus tutor for freshmen and sophomore engineering students. While a graduate student at Cornell, he served as an instructor for Saturday Science and Math Academy, a program designed to promote math, science, and technology to minority students in elementary and junior high school. This program was sponsored by Ithaca College, the City of Ithaca, and Cornell University, and Conrad helped to facilitate physics demonstrations, robotics and computer programming tutorials, and visits to regional cultural landmarks such as the Harriet Tubman Home.

During his time at Cornell, he served as a mentor for an undergraduate student in the Research in Undergraduate Education summer program in 1999. This student then went on to receive his Ph.D. and finished a postdoctoral internship at Harvard University.

For career possibilities  at Sandia, click here to view all jobs in