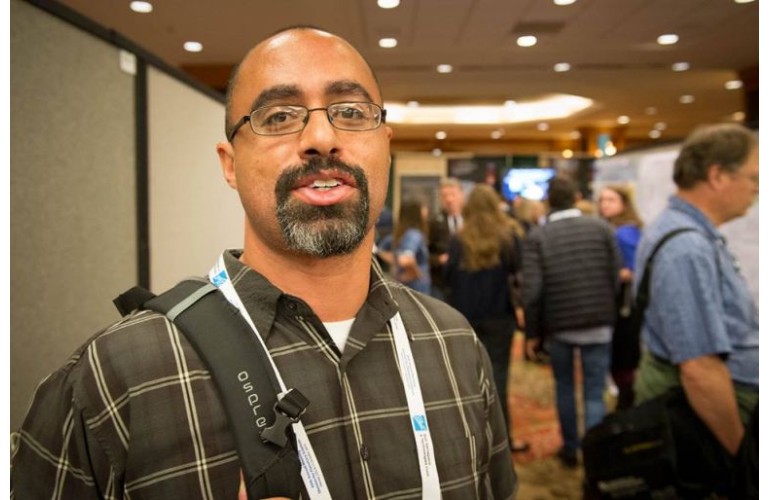 Just before 8 am EST Friday, the Cassini Mission at the Jet Propulsion Laboratory called “loss of signal” from what has been described an “incredible spacecraft, on an incredible mission, supported by an incredible team.”

On Oct. 15, 1997, the Cassini–Huygens robotic spacecraft set out on a seven-year, billion-mile journey to explore Saturn.

Linda J. Spilker, a Cassini scientist who has worked on the project for 30 years, said Cassini’s epic adventure around Saturn had sent  “mountains of data, stunning images, and provided great science for future Ph.D. Students.”

Spilker, who has a Ph.D. in geophysics and space physics, was a National Research Council and NASA Postdoctoral Program (NPP) adviser to Dr. Shawn Brooks from 2004 to 2006.

Brooks worked on the planetary exploration of the giant planet for 13 years.

When he was seven years old young Shawn became fascinated by astronomy. The New Yorker set the foundation for his future by attending the city’s math and science oriented Stuyvesant High School.

In August 2003, he received a PhD. from the University of Colorado in astrophysical and planetary sciences. The size distribution of Jupiter’s main ring was a major part of his Ph.D. dissertation. Brooks also has a master’s degree in astrophysical, planetary and atmospheric sciences from Colorado and a bachelor’s in physics and German studies from Rice University. Brooks says obtaining a PhD. is difficult and securing research grants to pursue one’s work beyond graduate school is trying.

“Because of my love for what I do, going to work is something I look forward every day,” he told USBE.

For more than a decade, Brooks served as a science planner on the Cassini mission to Saturn at the NASA Jet Propulsion Laboratory. As a planetary scientist, he studied Saturn’s rings.

Brooks had distinct tasks connected to the exploration of the ringed giant. His primary job was to help develop, plan and implement science and engineering activities executed by the spacecraft during the extended multi-year mission. As an affiliate of the far infrared spectrometer team, Brooks designs specific science observations of Saturn’s rings.

To be a Cassini Scientist

On October 20, 2009, students from across the United States who entered the Cassini Scientist for a Day essay contest called in and asked questions of Cassini scientists during a live USTREAM TV webcast.  Brooks was one of the scientists.

“Ring particles at the outer edge of the A ring orbit Saturn seven times for each six orbits of Janus and Epimetheus,”Books said. “Through this resonance, they help contain Saturn’s main rings.

“However, scientists still have questions about exactly how this works. We’d like to understand how this orbital switch affects the wakes that Janus creates in the A ring. So, I say we target Janus and Epimetheus to help scientists study the orbital interactions of these two moons, unravel their unique history and learn how they help shape Saturn’s rings!”

As a postdoctoral or senior scientist, Brooks lectured undergraduate and graduate classes on Jupiter’s rings, and the meaning of his research. He gave oral presentations on this work at the Lunar and Planetary Conference, the annual meetings of the Division for Planetary Sciences of the American Astronomical Society, meetings of the European Geophysical Society, the international Jupiter Conference in Boulder, and the Jupiter after Galileo and Cassini Conference in Lisbon. Watch the end of an era.

Congrats to Dr. Shawn Brooks! I remember Shawn and his family from Flushing NY. Lost contact with his mother, Cheryl, who was my neighbor years ago and would like to wish him well. He may remember my son Corey. I would appreciate it if this note could be passed on to Shawn. Thank you.