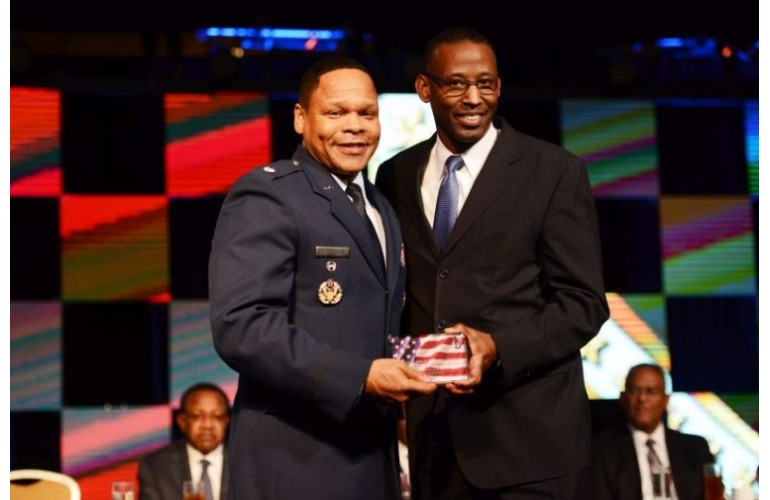 Timothy Bridges (shown left presenting an award at Stars and Stripes during the 30th BEYA STEM Conference)  was an active duty Airman for 17 years before retiring at the rank of colonel.

Bridges has spent the past 20 years translating his military experience into a federal civilian career.

He won the Career Achievement Award at the 2018 BEYA STEM Conference in February.

While on active duty and then as a member of the federal Senior Executive Service (SES), he established a way for the Air Force’s Community Partnership Program to enhance small business opportunities.

Under his leadership, he rallied to reduce 359 logistics information technology systems spread across 73 program elements.

More recently, his work in force protection and logistics has enabled  Air Force logisticians, defenders and engineers to operate the installation management portfolio in the Air Force.

Bridges said it’s important to build relationships in your career.

“People are often reluctant to interact,” said Bridges. “You have to invest in relationships.” “Some of the most important decisions made are based on personal relationships—who you know, do they trust you?” Bridges said.

“You have to have a set of values you follow, your own personal code, sense of morality, and ethics. People need to see that in you,” said Bridges.

He advises young professionals to also focus on those things they can control as well as stay in shape.

“Raising four boys, my parents were financially stretched.  To supplement hand-me-downs, we picked tobacco to pay for school clothes, but I never thought of us as poor,” Bridges said.

“Although I was recruited as an athlete, that hard work got me an academic full ride in engineering and into the Air Force.  They taught me to do your level best at whatever you do,  and that a good attitude will give you the altitude to soar,” Bridges said.

As assistant deputy chief of staff for logistics and engineering for the Air Force, Bridges is responsible for integration transportation, aircraft, and missile maintenance. He is also responsible for policy and preparing budget estimates.

Being able to express oneself and convey ideas is vitally important in mastering a successful career, Bridges said.

“If you want a career in Air Force civil engineering, force protection, logistics readiness, supply, or communications, you should express what you’re passionate about and provide some idea of the direction in which you want to go,” he said.

Bridges said that skills he looks for in employees and supervisors include: