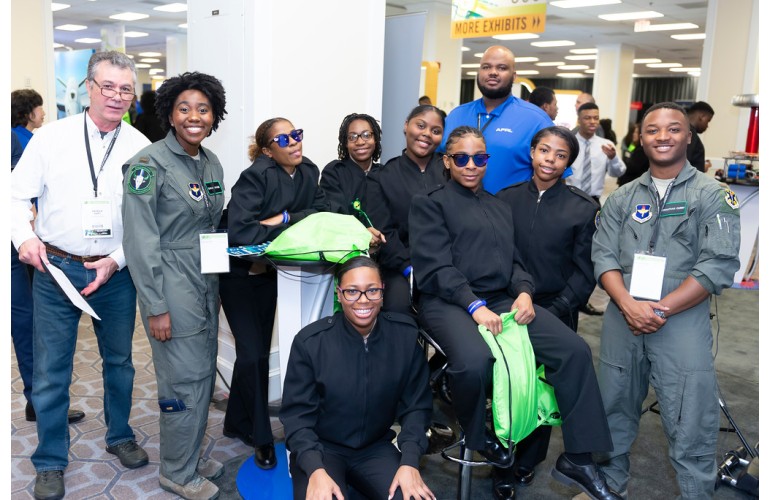 The “AFRL Inspire” channel on YouTube is a celebration of diverse people and all the technologies that impact United States Airmen and society through a series of short, engaging, and entertaining talks.

Scientists and engineers from the Air Force Research Laboratory (AFRL) brought all that and more with them to the 2019 Black Engineer of the Year Awards (BEYA) this February.

The AFRL stand at the BEYA Career Fair had some of the most popular displays, with virtual reality (VR) systems that immersed you inside virtual worlds, complete with touch controllers and sensors for the ultimate VR experience.

“Working with my colleagues in this community is very rewarding,” Price said in his acceptance speech at the BEYA Gala. “In 1980 I was navigating jet aircraft with the same tools used by Magellan, a sexton, and a watch. I can assure you I’m not that old,” he said as the audience laughed. Ferdinand Magellan was a 16th-century explorer whose efforts went a long way in making possible circumnavigation of the globe for the first time in history. “By 1989 I was installing the first GPS hardware for the same aircraft,” Price continued.

During his 34-year military and civilian career, Price has supervised the training of Air Refueling navigators and developed procedures that resulted in an increase in navigation accuracy that has greatly enhanced U.S. Strategic nuclear deterrence.  He also led a defense department and NASA team to produce the first Mach 10-16 scramjet combustion data.

In the community, Price, a husband, and father of six, also serves as a board member and chair of the Miami Valley Women’s Center, a pregnancy care organization, and the Patterson Park Church council. He sits on the Kettering Children’s Choir board and the Word of Life Fellowship board providing camping and sports opportunities to young people in over 70 countries. He received an undergraduate degree in aerospace engineering from North Carolina State University and a master’s degree in aerospace management from Embry-Riddle Aeronautical University.