Find a career that is right for you at BEYA 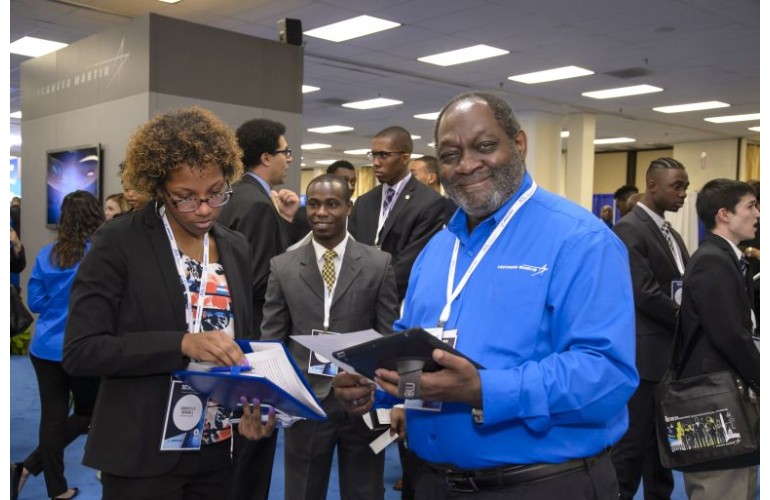 Bell Helicopter wants to meet engineers. Can they count you in at the BEYA STEM Conference Career Fair?

Northrop Grumman is looking for candidates interested in computing, engineering, business, and management. You’ll meet recruiters and company leaders at the Career Fair from 10 a.m. to 4 p.m.  Click here for more information on Cyber, C4ISR, Autonomous Systems or Logistics.

Three Lockheed Martin workers with a total of more than 60 years of experience are also waiting to talk to you.

“These kids are professionals and will get an opportunity if they come to work for Lockheed Martin. We have a Space division, Rotary Systems division,” [and more] said the 32-year Lockheed Martin veteran.

Levert’s team includes an HR professional, who does internship coordination for the Missiles and Fire Control Division. “When you bring your interns in, I take care of them. I’m like a ‘mother’ of interns,” she said. The other colleague is an ‘ambassador’ for quality.

Asked why he has stayed at Lockheed for three decades, Levert said the work has been both challenging and fun, two things he advises up-and-coming engineers to seek.

“Find a career that you have a passion for because you will spend most of your life at work. So why not make it fun and get paid for it,” he said.

Levert started his career in the U.S. Navy (Did you notice his Vietnam Veteran Cap? in the video)

After 10 years in the military, Levert went off to Ohio State University, where he earned a bachelor’s degree in welding engineering and material science. Upon graduation, he got a whopping 18 job offers!

While building jet engines for the Space Shuttle program at Amtek, he met the legendary Ronald McNair, a physicist who would become an astronaut. McNair recommended Levert pick an area and become an expert.

In 1986, Levert joined Lockheed Martin Missiles and Fire Control Division in Dallas, Texas where he has worked on projects under NASA and the Department of Defense that included the International Space Station and the Army Tactical Missile System (ATMS).

Levart said the ATMS was perhaps his most challenging. One part of the project required welding on a live missile to make it tamper proof.

Now a fellow with Lockheed Martin, Levert is one of the most senior technical authorities. Less than 1 percent of all Lockheed Martin’s 60,000 engineers are chosen for this honor, he said.

Levert’s other accomplishments include induction into The History Makers, work as a welding program manager for the International Space Station, a NOVA Award from Lockheed Martin, and the 2012 Ohio State University College of Engineering’s Distinguished Alumni Award.

He’s also proud to have served as president of the American Welding Society, the Federation of Materials Societies, and president of the International Institute of Welding Board of Directors.

A 2015 Black Engineer of the Year Award (BEYA) Career Achievement Award winner, Levert has been coming to the BEYA conference since 2001.

His dream to become an engineer began when he watched a movie about welding during his eighth-grade metal shop class.

“I saw the welders working on construction sites and got excited,” Levert told Ohio State’s College of Engineering. “Working on high rise buildings was exciting to me, and working with the various metals and their behaviors based on heat treatments fascinated me.”

And yes, Levert is related to the famous singing Leverts. They’re cousins.