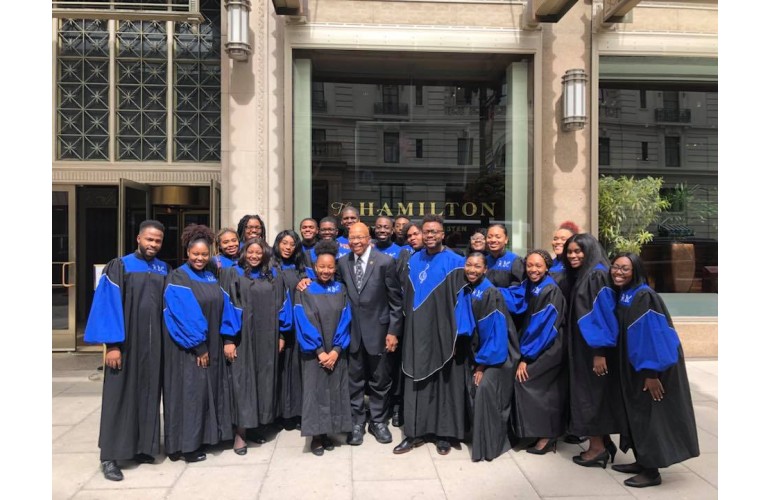 Tributes continue to pour in for the West Baltimore congressman who was a longtime member of the oldest African-American Greek-lettered organization. Gamma Boulé, the Sigma Pi Phi fraternity chapter in Baltimore, released a statement on the passing of the congressman Thursday. Elijah E. Cummings joined Phi Beta Kappa while he was at Howard University, a historically black college and university (HBCU) in Washington D.C.

The 2018 photo posted on the Elijah Cummings Facebook page is captioned “So inspiring to run into the Howard University Choir today. Glad to see my alma mater on the move and sharing their talent with the world.”

Sigma Pi Phi’s council of noblemen or “the Boulé” have similar professional and cultural interests as college Black Greek-letter organizations like Phi Beta Kappa, which is an honorary society of university undergraduates to which members are elected on the basis of high academic achievement.

“Archon Cummings was a product of our HBCU system, graduating from Howard University Phi Beta Kappa,” the statement said.

“Cummings was a long-time member of Gamma Boulé and served on the Grand Social Action Policy Committee with distinction,” said the statement signed by Gregory J. Vincent, Grand Sire Archon of the Sigma Pi Phi Fraternity. “Notably, Archon Cummings gave the Luncheon Address at the Inaugural HBCU Forum in 2017 and was featured on the cover of the Fall 2017 issue of the Boulé Journal.”

Congressman Cummings “will be remembered for his dedication to his constituents,” the Gamma Boulé statement said. “The nation, the state of Maryland, his home city of Baltimore and Sigma Pi Phi greatly benefited from his dedication to the greater good.”

In one of his many interviews with Black Engineer magazine, Cummings talked about his work to make technology accessible to more Americans.