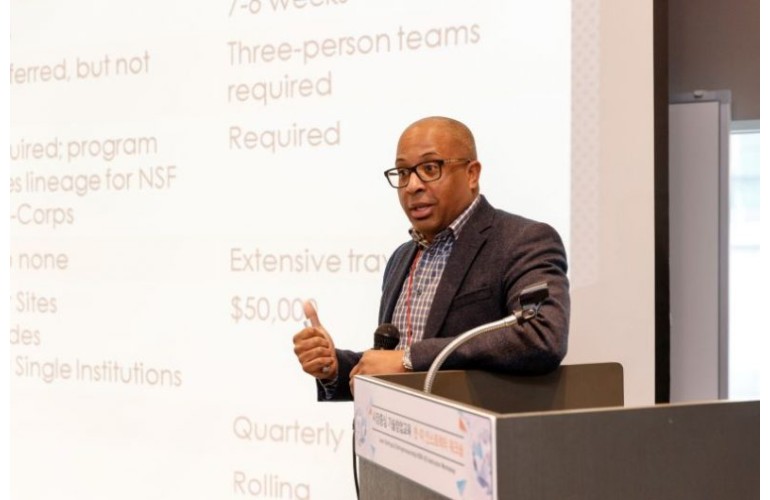 When it comes to innovation, historically black colleges and universities (HBCUs) are incubators for extraordinary research and development, said Victor R. McCrary at the 2018 BEYA STEM Conference in February.

Prior to joining the University of Tennessee in March as vice chancellor for research, McCrary served as the first vice president for research and economic development at Morgan State University.

In that role, he played BEYA STEM Innovation Hall host and took the audience behind the scenes to the people and academic institutions producing some of the nation’s most exciting and promising innovations.

Dr. Grant Warner, who directs the Howard-Hampton I-Corps, focuses on commercializing university research from HBCUs in the District-Maryland-Virginia area.

Dr. Warner has trained and advised more than 200 faculty and student teams in venture formation. He has also co-founded three startups and orchestrated licensing deals with Fortune 500 companies.

Since 2016, he has led HowU Innovate programming, including Bison Startup and Bison Accelerate courses, in which students are guided through the process of founding technology startups.

“It was an honor to be recognized with the 2018 HBCU Innovation Award at BEYA,” Dr. Warner said. “The event provided the opportunity to network with other innovators and discuss how we can expand the innovation ecosystem to support our community.

“That ecosystem involves multiple stakeholders including government, industry, academia, and creative talent. HBCUs are uniquely positioned to bring together all of those stakeholders. Events like BEYA facilitate the critical discussions which allow us to fully leverage our creative potential,” he said.

Dr. Warner is the co-founder of ConnectYard, a social analytics platform integrated with learning management systems and e-learning platforms. He co-founded XediaLabs, a Washington DC-based firm that provides training and consulting to startups.

Dr. Warner has spoken on innovation themes such as “Building an Innovative Organization” during the NAVSEA Distinguished Speaker Series, “Feeding the Entrepreneurship Ecosystem” for NCET2’s University Startups and Global 1000,  “Smart Cities and Smart Infrastructure” for the Economic Intelligence Round Table, Office of the Chief Technology Office, and “Universities at the Center of Innovation” at the Digital Legal Innovators Conference.