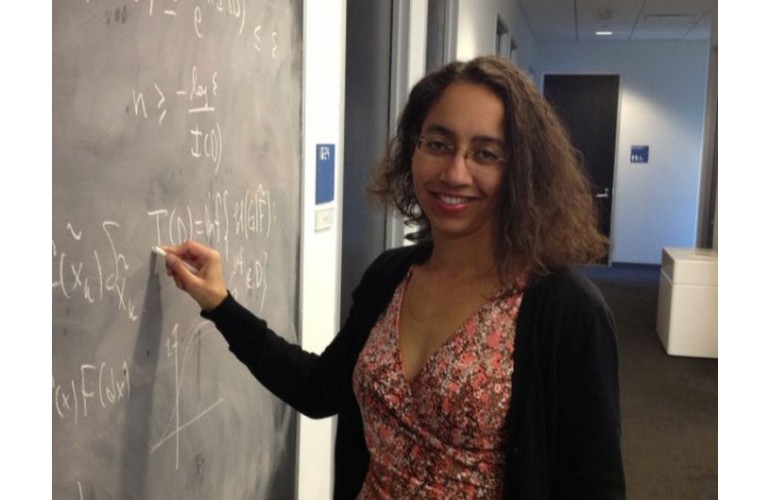 Talitha Washington is a young urban mathematics professional. Born in Frankfort, Indiana and raised in Evansville, Indiana, she earned a bachelor’s degree in mathematics with a minor in Spanish from Spelman College in 1996.

“Getting into mathematics was not anything that I had thought of, but fortunately I had people around me that said ‘here do this’ and then I think I was naive enough, or maybe smart enough, to do what they told me. It has worked out to be a great career and a lot of fun,” she told Chalkdust, a magazine for the mathematically curious.

At Spelman college, Talitha was taught by Etta Falconer and Sylvia Bozeman. The two of them were “inspirational” and “pioneers in making pathways for women of color,” Talitha said.

After completing her undergraduate studies at Spelman, she studied at the Universidad Autónoma de Guadalajara in Mexico.  She was a VIGRE  post-doctoral research associate in the Department of Mathematics at Duke University and held assistant professorships at The College of New Rochelle and the University of Evansville.

In 1998, Talitha graduated with a master’s from the University of Connecticut followed by a PhD. in mathematics in 2001. Her thesis was the Mathematical model of proteins acting as on/off switches and how differential equations applied to cellular processes.

In the summer of 2017, she joined the National Science Foundation (NSF) as a program officer in the NSF Division of Undergraduate Education. Talitha is interested in the applications of differential equations to problems in biology and engineering, as well as the development of nonstandard finite difference schemes to numerically solve dynamical systems.

In this NSF video “Women History Makers: Talitha Washington” she shares how math didn’t come easy for her, and if not for other amazing women in her life, she might not have become the award-winning mathematician she is today.  Click here to view.

Her work on Dr. Elbert Frank Cox, the first Black person to earn a Ph.D. in mathematics, has been shared on radio and television, as well as in the Notices of the American Mathematical Society,  a journal for mathematicians. She often shares the mathematics shown in the Hidden Figures movie.

Talitha serves on the Council of the American Mathematical Society and the Executive Committee of the Association for Women in Mathematics. She is active in programs led by Society for the Advancement of Chicanos/Hispanics and Native Americans in Science (SACNAS), Enhancing Diversity in Graduate Education, and Mathematical Biosciences Institute Research Experience for Undergraduates.

Talitha is a tenured associate professor of mathematics at Howard University.