Honoring Veterans: Past, Present, and Future 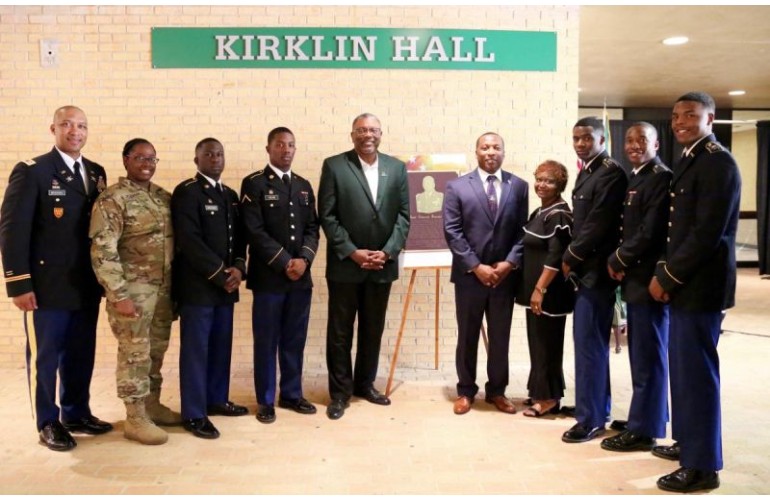 US Black Engineer & Information Technology (USBE) magazine has a long-standing tradition of honoring veterans— men and women who have served in the United States Armed Forces. Every year, the BEYA Conference, co-hosted by Black Engineer magazine, recognizes the service of veterans for keeping the nation secure from all of the different threats it faces.

In February 2020, BEYA will host the fifteenth annual Stars & Stripes, with officers and defense department leaders in attendance. The program includes a science, technology, engineering, and math (STEM) mentoring session with high school students, the only event to feature officers from all branches of the United States military in a room.

This Veterans Day, USBE online celebrates veterans—past, present, and future—with the story of a Distinguished Military Graduate from Mississippi Valley State University in the class of 1987. Major General Ronald Kirklin has been featured in Black Engineer magazine’s Veterans edition since he was promoted to Brigadier General. The USBE “Top Blacks in the Military” and “Senior Executive Service (SES)” lists show appreciation for servicemen and servicewomen in our communities.

Last fall, the military science department at Mississippi Valley State was named Kirklin Hall in honor of the major general. According to a university (MVSU) statement, Kirklin began his military career as a cadet more than 30 years ago in the same building that now bears his name.

“I walked through this building many times, really not knowing what the future held,” Kirklin said at the event. “No words can express my gratitude for what this dedication means to me, but I think what matters most is what it means to the people who invested in me,” the Lexington, Mississippi native said. “I’m living proof that anything is possible,” he said to the audience that included ROTC students.

MVSU President Dr. Jerryl Briggs said that Kirklin is the epitome of the greatness that a Valley graduate can achieve.

“I’m overjoyed by this opportunity to honor one of Valley’s own,” said Briggs. “When our students see the name of this hall, hopefully, they’ll want to know why, and we’ll be able to show them all the great things that Major General Kirklin has accomplished.”

Kirklin’s military service began in 1988. After graduating from the Advanced Course, he went on to serve as a Class IX Accountable Officer, Supply and Services Officer, Support Operations Officer, and as the Light Maintenance Company Commander. From 1996 to 1999, Kirklin was assigned to Hohenfels, Germany, where he worked as the Combat Service Support Observer/Controller. From 1999 to 2000, he was a student at the Command and General Staff College at Fort Leavenworth, Kansas. Later, he served as the course director at Fort Lee, Virginia. In 2004, Kirklin was assigned to the 1st Cavalry Division and served as a deputy commander while deployed during Operation Iraqi Freedom.

After re-deployment, he assumed command of the 215th Brigade Support Battalion, 3rd Brigade Combat Team at Fort Hood. After relinquishing battalion command in 2008, he attended the Army War College at Carlisle Barracks, Pennsylvania. After graduating in 2009, Kirklin assumed command of the 4th Sustainment Brigade. He later deployed to Iraq. Kirklin was assigned to the United States Central Command J4, in Tampa, Florida, in 2012 as chief of current operations. Kirlin became the 53rd Commandant of the Quartermaster School in 2014. He was promoted Brigadier-General the same year. In 2016 MG Kirklin was assigned as the director of operations, Office of the Deputy Chief of Staff, G-4 at the Pentagon followed by an assignment as deputy chief of staff, G-4 U.S. Army Forces Command.

At the MVSU ceremony, Kirklin said he never imagined that he would become a major general, a ranking that less than one percent of military officers achieve. He used the opportunity to encourage MVSU ROTC students in attendance.

“Performance is important—no matter what you’re doing, the results are what matter,” he said. “You have to be prepared, dedicated and persistent in what you do, and the last thing I’ve learned as a leader is that you have to care for people.”

During a separate ceremony, the major was honored as a “dedicated and distinguished veteran of the U.S. Army” in the House of Representatives by Congressman Bennie G. Thompson, the longest-serving African American elected official in the State of Mississippi.

“Kirklin was an outstanding student and cadet,” recalled Kirklin’s former instructor and mentor First Sergeant Al Hines during the MVSU ceremony. “He was obedient, dedicated, and disciplined, so our job was that much easier with him. I consider it an esteemed and distinct pleasure to have had Kirklin as a student.”