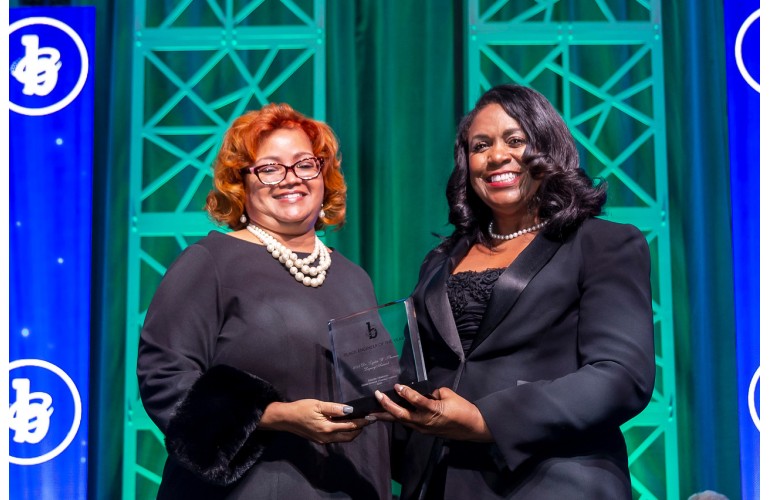 Employers across the country have hired or are hiring summer interns. For organizations like AT&T, internships are all about turning ‘students into tomorrow’s leaders’ by giving them ‘the right launching pad for an amazing career.’

Almetia Simmons (standing left in the photo) is now a senior network planning engineer. She started work as an intern at AT&T during the summer of 1986. Through the internship program, she met several professionals who became her mentors. After she graduated from college, Simmons landed a fulltime position at AT&T with a bit of help from those mentors.

“I began my career with AT&T in the summer of 1987. With training provided by the company, I have been able to remain employed with AT&T,” she told US Black Engineer magazine.

Through an AT&T continuous learning program with Udacity, Simmons recently completed introductory coursework in data analysis. She also plans to refresh her learning in statistics.

“The future lies in these two areas and I would like to continue my career for several more years,” she said.

During the BEYA STEM Conference in February, Simmons received the Dr. Lydia W. Thomas Legacy Award,  named for the 2003 Black Engineer of the Year, the second woman to earn this prestigious award. As a former president and CEO of Noblis, Thomas was responsible for the direction of the company’s new and emerging technologies.

The presenter of the 2019 Lydia W. Thomas Legacy award was Theresa Spralling (standing right), associate director for diversity and inclusion at AT&T and chief executive of Women at AT&T. More than 17,000 members strong, the national employee resource group inspires women at the telecommunications company to achieve their goals.

“Almetia Simmons has spent 31 years at AT&T,” Spralling said in her speech. “She gives back through AT&T, her church and sorority.”

Growing up the oldest of four children, Simmons said her single-parent Mom stressed the importance of education. After graduating as valedictorian of the class, young Almetia’s hard work opened doors to opportunities with a full-ride scholarship.

“I knew I wanted to have an interesting job,” Simmons told US Black Engineer. “But more importantly I wanted to earn money to help my family. I read several articles and decided (on) math or engineering.”

Simmons graduated from Jackson State University with a bachelor’s degree in mathematics and a minor in computer science. She is the mother to twin sons and a daughter, all of whom have attended college.

Through AT&T’s community outreach programs, she volunteers to serve at local schools. She also supports her alma mater because she would like to see them continue to provide education for next-generation students. Simmons is active in the East Point College Park alumnae chapter of Delta Sigma Theta Sorority, Inc., a sorority of more than 200,000 college-educated women dedicated to service in programs that target the African American community.

“I currently serve as co-chair of our Educational Development Committee,” Simmons said. “In this capacity, I have the opportunity to work with our youth initiative programs for students in middle school and high school. I am also involved in several activities with my church family,” she said.