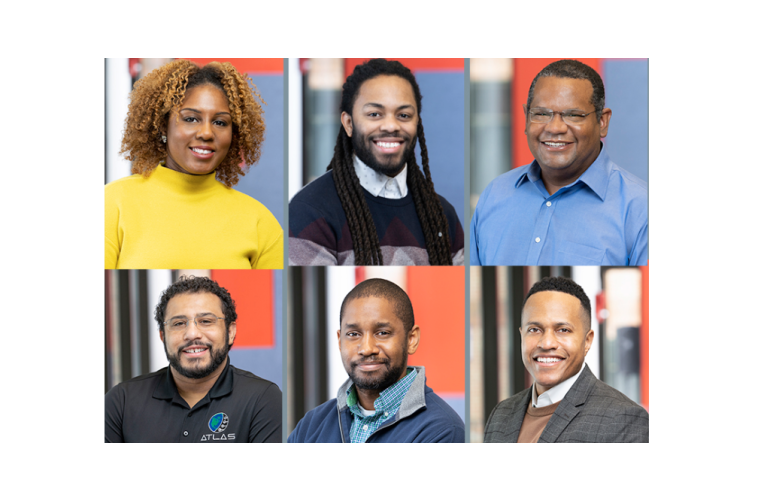 The 2021 BEYA winners join a cadre of Applied Physics Laboratory staff members who have been recognized at the Science, Technology, Engineering, and Math (STEM) Global Competitiveness Conference.

Adam Freeman received the Outstanding Technical Contribution in the Nonprofit category. The Applied Physics Laboratory, a not-for-profit division of The Johns Hopkins University, meets critical national challenges through the innovative application of science and technology.

Leveraging his knowledge of fast UV-cure polymer systems, he developed a flexible electrolyte system overcoming key deficiencies in current batteries. His approach produced highly conductive, thin, flexible electrolyte films for the first time. Batteries based on these freestanding, self-extinguishing aqueous gels are safe, and they continue to function after being cut, immersed in water, and subjected to ballistic impact.

The Dr. Sandra Johnson Legacy Award went to Makita Phillips. Johnson conducted research in a number of computer-related areas and was part of the design team that developed the prototype for the base machine for “Deep Blue”, IBM’s world-famous chess machine. Dr. Johnson was a member of the IBM Academy of Technology, which consists of the top 1% of IBM’s over 250,000 technical professionals.

Phillips is recognized for her modeling and simulation experience in thermal and structural systems, and she is an important contributor to the development of load-bearing, high-temperature thermal protection systems. Recently, she was appointed as the Graduate School Conference Chair for NSBE’s 47th Annual Convention. She also founded both the Minority Engineering Graduate Student Association at North Carolina State University and the Florida A&M University Engineering Alumni Chapter.

Starkey-El received the Science Spectrum Trailblazer Award.  He is a data scientist and analyzes data to identify indicators of threats to the health and safety of civilians and soldiers, then develops algorithms and tools to automate the detection of these threats and facilitate more effective responses.

He is also the chair of the APL Technology Leadership Scholars (ATLAS) internship program committee. ATLAS was developed for full-time college students majoring in a STEM field at a Historically Black College or University (HBCU), Hispanic Serving Institution (HSI), or Tribal College or University (TCU). Under his leadership, the ATLAS committee has increased staff member engagement in the program, the number of student applications, and intern cohort sizes. Moreover, his efforts helped ATLAS achieve the highest conversion rate (transitioning interns to full-time employees) of any internship program at APL.

Ayenson, McGrath, and Little were honored with the Modern Day Technology Leaders award, given to professionals shaping the future of engineering, science, and technology.

Ayenson supervises the Cyber Systems Development and Experimentation Section in APL’s Asymmetric Operations Sector (AOS). He has led the development of the APL Cyber Experimentation Center, an experimentation center capable of rapidly standing up realistic computer environments — a previously lengthy, manual, and difficult-to-customize task — where cyber researchers can closely monitor the progress of complex experiments. He is also the manager for several projects, including one to design and conduct rigorous cyber experiments that assess the cognitive and technical effects of cyber maneuvers. He has demonstrated an ability to drive cutting-edge research and has received multiple software-development awards during his short time at APL. He was recently appointed as a research area co-lead for the Continuous Cyber Advantage envisioned future in AOS, to further experimentation and rigorous research at the Lab.

McGrath, a mechanical engineer in the Lab’s Air and Missile Defense Sector (AMDS), is the project lead and systems engineer for launcher upgrades and integration efforts in support of the Navy’s Integrated Warfare Systems Program Office. He has been the lead designer on packaging new launcher electronics and for completing analysis for changes to a gas management system. During his time at APL, he has assembled several cross-disciplinary teams to support Department of Defense programs. For example, he led the development of a kinematic testbed that replicates the operational motion of a new system in an indoor test facility to simulate a payload’s ignition electronics.

Little, also of AMDS, led an Integrated Air and Missile Defense study that impacted tactical guidance for how sailors set up the AN/SPY-1 radar on Aegis Baseline 9C ships, and he was the lead APL radar analyst supporting the investigation of missile firings in the Red Sea by the USS Mason. He also supported the planning, execution, and postflight analysis of many Aegis test and evaluation events for the Program Executive Office for Integrated Warfare Systems 1 (PEO IWS 1), eventually representing APL as a voting panel member for test event certification. He currently supports the integration of AN/SPY-6 into Aegis Baseline 10 for PEO IWS 2’s Advanced Radars program as the Combat System Integration Working Group team lead.