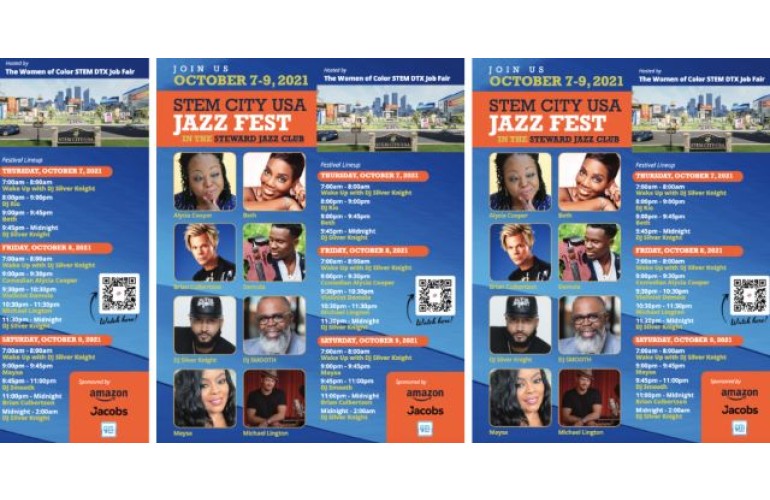 Wake Up with DJ Silver Knight, DJ Rio, and Beth. Growing up, Silver Knight was surrounded by music, singing, dancing, writing, rapping, and making beats. One of his first inspirations was a brother, who was a rapper.

Beth was a standout contestant on Season 16 of NBC’s “The Voice” and joined John Legend’s team during the first-ever “Cross Battle Round.” Beth’s new single “You’ve Already Won” was released in 2020. A Christmas single was also released for the holiday season, and her second album is due to follow. Beth continues to perform as a solo artist and tour as a support vocalist with Motown R&B artist KEM.

Tune in for comedian Alycia Cooper from 09:00 PM to 09:30 PM ET: The greatest joy Alycia Cooper has found being a stand-up is the opportunity to perform for American servicemen and women. She has entertained troops in Japan, Korea, Guam, Oman, Kuwait, Saudi Arabia, and Djibouti and is humbled to meet the nation’s most courageous. Alycia has been the opening act for some of the biggest names in comedy: Dave Chappelle, the late Dick Gregory, George Wallace, Whitney Cummings, Paul Mooney, Tom Arnold, and Felipe Esparza. She has also performed on NBC’s “Last Comic Standing,” “America’s Got Talent,” BET’s “Comic View,” “Byron Allen’s Comics Unleashed,” and Hulu’s “Coming to the Stage.” An Emmy-nominated actress and director, Alycia is known for her “Baggage Fees” bit and her “Kids Today” and “Office Environments” bits. Recently, her videos on Tru TV went viral. She will be in the new Apple TV show “Are You Sleeping,” executive produced by Reese Witherspoon and Octavia Spencer.

Violinist Demola, 09:30 PM – 10:30 PM ET: Demola is a Lagos-born musician, singer-songwriter, and violinist. One of the first of his kind, the Houston-based artist fuses Afro-Beat, reggae, pop, and hip-hop. His proficiencies stretch from the violin to piano, guitar, viola, djembe, mandolin, ukulele, and conga.

Michael Lington, 10:30 PM – 11:30 PM ET: Before COVID-19, Michael Lington was looking forward to the birth of his son, touring with his fellow saxophone stars Vincent Ingala and Paul Taylor, and solo dates in Europe. With the lockdown, Lington quickly turned his home studio into one of contemporary jazz’s premiere virtual performance destinations. Through a series on the StageIt platform, Lington and friends brought fans together. His new recording Alone Together on Peak Records (distributed via BVD/Sony/Orchard) is unique.

Maysa, 09:00 PM – 09:45 PM ET: Having collaborated with everyone from Stevie Wonder to Incognito, Angela Bofill, Will Downing, and Jonathan Butler, and Phil Perry, Maysa can hang with the best. So, it is no wonder she has received many awards for her work, including Soul Train’s first Centric Award in 2009 and a Grammy nomination for Best Traditional R&B.

DJ Smooth, 09:45 PM – 11:00 PM ET: Donnell Campbell has been a deejay for 24 years and received his performance name “DJ Smooth” very early in his career. During his DJ journey, he briefly moved to North Carolina, where he played salsa, cumbia, and merengue for largely Hispanic/Latino crowds.

Brian Culbertson, 11:00 PM – 11:59 PM ET: Brian Culbertson has charted his own unique course in music throughout crafting a 20-album catalog and architecting more than 30 Billboard No. 1 singles as a multi-instrumentalist, songwriter, and producer. Culbertson burst onto the scene in 1994 with a chart-topping album that he recorded in his college apartment. “Long Night Out” landed him a record deal and signaled that a star was born. Flash forward to his new “XX” album —those X’s are Roman numerals—finds Culbertson making a record, unlike any previous releases. “It’s a mix of things that I’ve done throughout my twenty records,” said the Chicago-based Culbertson. “There’s a lot of funky instrumentals, some pop-sounding tracks, a couple of slow jams, straight-ahead jazz, gospel, some vocals, lots of horns, and some straight-up funk.” In addition, Culbertson founded and curates the annual Napa Valley and Chicago Jazz Getaways, which have attracted guests from all over the globe.