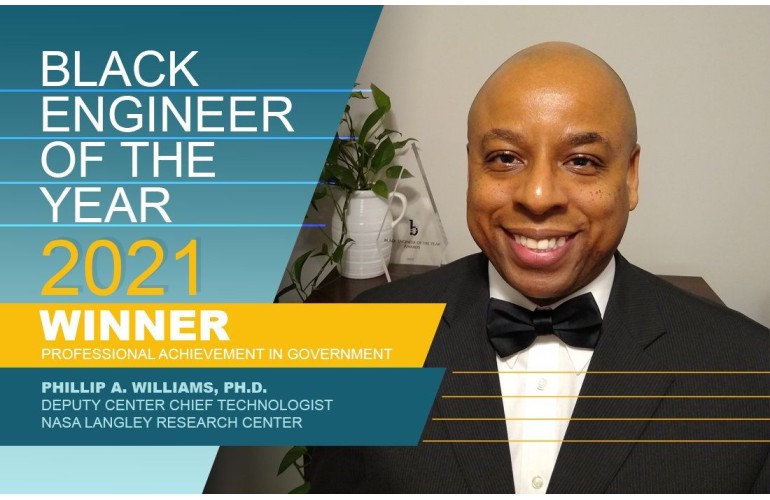 Williams is the deputy center chief technologist at NASA’s Langley Research Center in Virginia. Nominated for the award by center officials, Williams said the award highlights Langley’s efforts in promoting science, technology, engineering, and math (STEM) fields to the public.

“I am excited and humbly grateful to be selected for this award from among my peers,” he said. “One of the biggest impacts to me of this award is the goal of the BEYA awards and the conference to reach the student communities of underrepresented minorities in the STEM fields and to show them, professional role models, in STEM to inspire them.”

In his role at NASA, Williams provides strategic oversight of the center’s multi-million-dollar innovation investments. During the pandemic, Williams’s efforts leading an overhaul of the portfolio’s information technology and communication infrastructure significantly streamlined the transition to a distributed workforce through the creation of virtual collaboration spaces and dynamic, cross-portfolio dialogues.

“Williams’s leadership and technical acumen have continually resulted in the products and achievements that have contributed significantly to NASA’s mission through the establishment of partnerships and relationships that result in high-value, cross-organizational integration,” said Melvin Ferebee, director of Langley’s Systems Analysis and Concepts Directorate.

The BEYA Professional Achievement in Government Award is earned by a highly experienced, mid-career STEM professional who has made significant discoveries, made important advances in his or her chosen STEM career path, and is acknowledged as a leader of large STEM initiatives.

Williams praised his parents for instilling in him a love of education, creativity, and imagination. As a child, Williams was inspired by seeing a Black mechanical engineer from Langley as he donned a blue astronaut flight suit. He was in awe of his story, journey. and career. He aims to provide that same inspiration to today’s youth.

“We must commit to making a positive impact on our young people,” he said. “That’s what brought me to this moment and this award.”