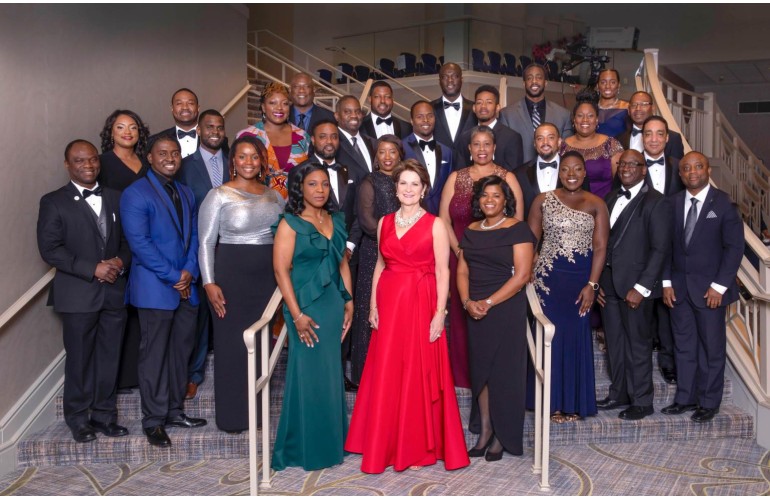 Lockheed Martin has released their class photo taken at the Black Engineer of the Year Awards. Each year, winners from the co-host of the annual BEYA Conference pose for one of the best snapshots at the event.

February’s BEYA Conference drew thousands of people, with forums for the presentation of awards to science, technology, engineering, and math (STEM) leaders.

Keynote speaker Marillyn A. Hewson, chairman, president & CEO of Lockheed Martin Corporation, opened the BEYA gala with a call to inspire, mentor, and lift up young men and women as they aspire to STEM fields and recognize those who are building a brighter future for all.

“At Lockheed Martin, we are proud of our strong and enduring relationship with BEYA, ” Hewson said. “For 34 years, we have worked together to expand hope and opportunity for thousands of young people. Each year, this conference provides an opportunity for companies to recruit the talent they need to solve 21st-century problems, for professionals to network and grow, and for students to learn, connect, and seek out life-changing opportunities.”

One Lockheed employee who received an award during the gala was Michael Gordon, vice president of rotary mission systems operations, strategy, and infrastructure at Lockheed Martin.

“Throughout his 36-year-long career, Mike Gordon has been a leader in and out of the office,” said Stephanie C. Hill, senior vice president for business enterprise and transformation at Lockheed.

Hill, who is the 2014 Black Engineer of the Year, said she has worked with Gordon for many years. “While building an esteemed career, he’s shown his commitment to STEM and the talent pipeline,” Hill continued. “He’s been a valued partner of the AMIE tutoring program at Morgan State University, which helps middle- and high-school students. He also serves as an executive sponsor and engineering advisory council member at Alabama A&M.”

“Throughout my life and career, I’ve felt blessed,” Gordon said. “My parents and family members made numerous sacrifices for me along the way, including migrating to this country for a better life while I was a child. To reinforce the benefits of education and a strong work ethic as an enabler of success. I’ve also had many supporters throughout my career who have given me a chance, even when at times I felt it wasn’t as deserving. Partly because of those examples from my family and supporters, I’ve felt compelled to help, enable, encourage, and support the success of others, both behind and around me.”