Mentoring at BEYA Stars and Stripes 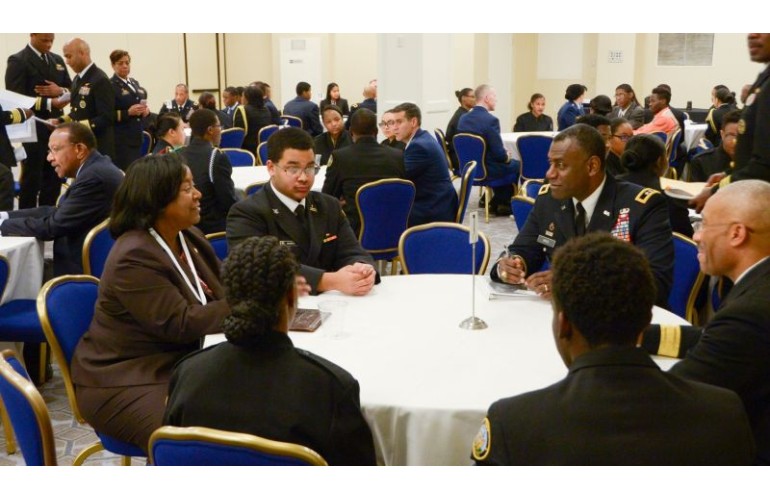 Supporting young people is an ambition for many organizations. BEYA Stars and Stripes doesn’t just make the claim, it has a two-prong approach to providing young people with meaningful guidance through mentoring.

Walter Davis, who serves as chairman of the BEYA Stars and Stripes Committee and is a retired deputy chief of naval
operations, recalls coworkers and friends asking him and other high-ranking military personnel to talk to and advice their children as well as request letters of recommendations from them.

“Let’s take that to youth that don’t normally have that opportunity,” said Davis of the impetus for starting the Black Engineer of the Year Awards (BEYA) Stars and Stripes Pre-Dinner Mentoring and the Sustained Mentoring program.

Both programs seek to bolster young people’s interest in science, technology, engineering and math (STEM) and the careers and opportunities that exist in those fields.

Jesse McCurdy, director/coordinator of the Sustained Mentoring Program, said it was determined that students need more than once-a-year contract with mentors. Instead of waiting to see young people only at the annual BEYA events, the mentors—mostly retired military and civilians—go where to the students are during the school year.

Young people, who teachers and school officials identify as having “a decent grade point average,” potential and an interest in STEM meet with the mentors.

The mentors share the realities of working in STEM careers, the difficulties they encountered, salary information, courses to take in college, ways to finance college and more, McCurdy said.  The mentors also arrange for speakers at the schools and often participate in career or STEM day events.

One of the students McCurdy said has benefitted from the Sustained Mentoring Program is Alexander Hoganson, who attended the Thomas Jefferson High School for Science and Technology in Alexandria, Virginia. Hoganson is currently a sophomore at Yale University working on a bachelor’s degree in mechanical engineering.

Four other schools in the District of Columbia, Maryland, and Virginia, as well as two schools in Philadelphia, are involved in the program.

The four-year-old BEYA Stars and Stripes program currently has 10 mentors (two to three per school) but McCurdy would like to recruit more. McCurdy pointed out the mentors, many of whom are retirees, are former high-ranking officials—admirals, generals and members of the Senior Executive Service.

“They have the time to do it,” said McCurdy of the retirees.

Three hours before the glitz of the Stars and Stripes Dinner at BEYA, hundreds of students connect with leaders in the military and government.

The Pre-Dinner Mentoring Program, which began in 2011 with about a hundred students and mentors, now brings together approximately 400 students from Washington, D.C., Maryland and Virginia and 200 mentors.

According to Anthony Winns, chairman of the Mentorship Committee and a founding member of the BEYA Stars and Stripes Committee, the students attend different sessions in which they hear from the mentors in a group as well as more personal settings.

In the “speed mentoring” session students rotate from one table of mentors to another getting advice about career paths, overcoming challenges, and courses to take in college. Another session gives the students the opportunity to approach and have a discussion with any of the mentors.

That happened for Winns, a retired vice admiral when he met a 10th grader one year. Winns took the student under his wing, mentored him and eventually he interned at Lockheed Martin, where Winns currently serves as chief executive, Middle East, and Africa Region. The student now is a high school senior with acceptance letters from five colleges and an interest in becoming an aeronautic engineer.

“He’s going to do great,” said Winns proudly. “He’s a rising influencer in this country.”

Winns points out that the mentors represent a broad spectrum of careers including military personnel, astronauts, NCIS leaders, comptrollers, government officials, representatives of the departments of agriculture and energy, CIA, FBI, and others.

Looking back to the program’s early days when the first program had 75 students and 35 mentors, Winns is pleased with its progress and the work done by a committee of 10 dedicated volunteers.

“I think the program has evolved, 2018 will be our eighth session,” said Winns. “We have been making a difference.”