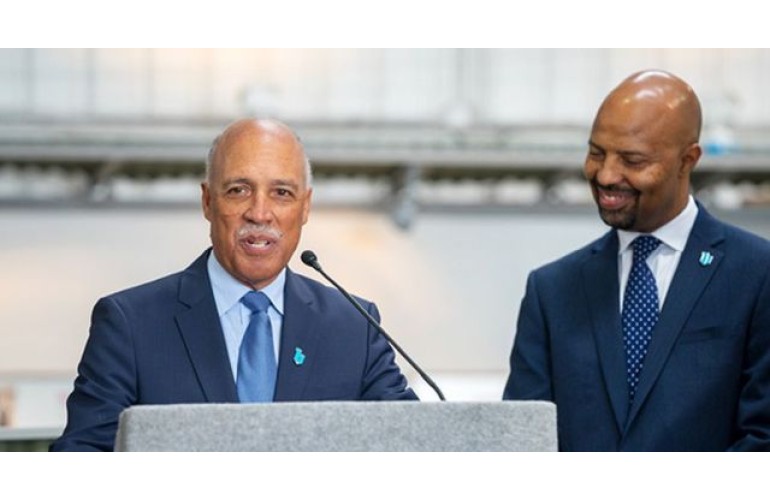 The space race is expected to become a $2.7 trillion powerhouse, yet companies can’t find enough people for rocket science and system engineering jobs.

Base-11,  a nonprofit group which teaches people to think beyond decimals, sets students on direct pathways to four-year degrees, jobs, and start-ups with hands-on training in science, technology, engineering, and math (STEM).

Recently, a  donor gave a $1.5 million grant to Base-11 to foster career development with aerospace departments at historically black colleges and universities (HBCUs).

The initiative was announced at the annual gathering of Sigma Pi Phi Fraternity, also known as The Boulé, the oldest African American fraternity with more than 5,000 members across 134 chapters.

“Sigma Pi Phi is honored to support the next generation of aerospace talent, and ensure young African Americans are part of the commercial space race,” said Wes Coleman, president of Sigma Pi Phi. “We are proud to count among our members the leaders of many HBCUs and of Base-11, and look forward to working together.”

The grant to increase the numbers of African Americans in the commercial space industry comes just weeks after the announcement of the Base-11 Space Challenge, a $1 million competition for a student-led team to build and launch a liquid fuel rocket to the edge of space.

The Base-11 Space Challenge was announced June 6 at Tomorrow’s Aeronautical Museum, where youth in South Los Angeles can learn everything from piloting aircraft to building rockets.

“The African American workforce and entrepreneurial community was largely left behind by the tech boom in Silicon Valley, and we don’t want to see the same thing happen with commercial space,” said Landon Taylor, chief executive officer of Base-11.

“This grant will equip an HBCU with the seed capital and human capital needed to build a student rocketry program that can work in concert with industry to develop in-demand aerospace talent and launch new innovations that will harness space as the new frontier,” Landon said.

Base-11 will fund a grant to one HBCU to develop a hands-on rocket program, create a liquid-fuel rocket lab, as well as recruit and hire aerospace faculty to head the development of a liquid fuel program within its engineering school.

“We hope that this is just the first of several grants, and that more partners will step forward to establish and support aerospace education at HBCUs,” said Dwayne Murray, who leads Sigma Pi Phi’s committee on HBCUs.

Interested HBCUs will be able to apply for the grant beginning August 2018. The grant recipient is expected to be selected by the end of fall.

In year 2019 there are lot of films are going to be released. Obviously, there are Avengers part 2, new Star Wars Episode nine and many others. These are movies that every person wants to see, but sometimes you can miss it.It is where apps come in handy you can watch a movies for free. Btw, looking for the best app to watch free movies on your iOS phone? Then your should check Showbox APK. This is the most famous app today that has a big library of shows and films. This app is also available for computer users. But your need to download it first to enjoy free films Showbox download on PC

I like rock bands! I really do! And my favourite rock band is Hootie & Blowfish! All band members has reunited to perform more than 50 concerts for their fans in 2019! To know more about Hootie and The Blowfish in 2019 visit website Hootie and the Blowfish tour Birmingham. You won’t miss any performance in 2019 if you visit the link!

Backstreet Boys BSB are an American boy band. The band was founded on April 20, 1993 in Orlando, Florida, by Lou Pearlman. Now this is the most successful band with more than 100 million records sold all around the world. The band was named after a flea market in Orlando, the “backstreet flea market”. In 2019 BB has more than 50 concerts in the US with their DNA World Tour. Check concerts at Backstreet Boys tour St. Louis website. Full list of tour dates & concerts!

Thank you for sharing the article. I find it interesting. I hope to see more articles like this from you. If you want to watch the movie, please visit my website https://123moviesc.to/

Your article is interesting. I will definitely share it with my friends. Please go to my web site for entertainment https://fmoviesc.to/

You know, I’m very interested in the problem you share. I have been searching for it for a long time. I will support your blog, you also support my movie page https://yesmoviess.to/

Your article is great. I like so much. And it’s even better if you watch movies on my site. PLEASE CLICK ON MY PAGE TO SEE MORE NEW FILMS https://solarmoviesc.to/

Thanks for your post. We appreciate your useful content. I hope to have more articles of yours.
Jav Censored