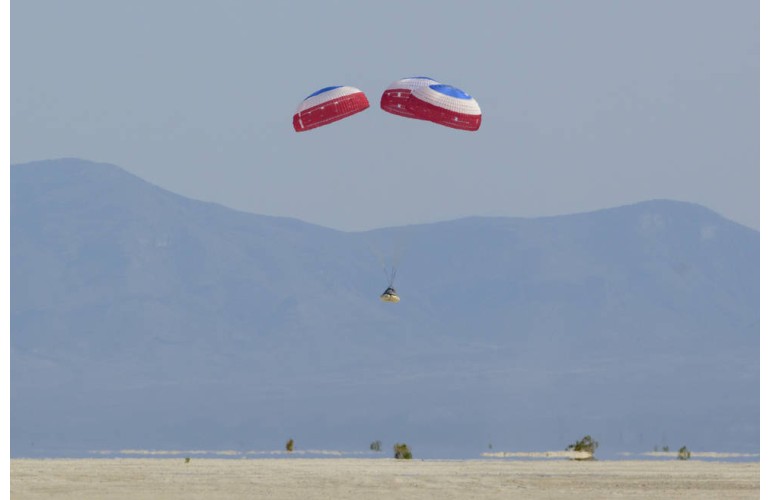 Starliner carried a lifelike test device named Rosie. During OFT-1, Rosie was outfitted with 15 sensors to collect data on what astronauts will experience during flights on Starliner.

For OFT-2, spacecraft data capture ports previously connected to Rosie’s 15 sensors were used to collect data from sensors placed along the seat pallet, which holds all the crew seats in place. Among the cargo returned were three Nitrogen Oxygen Recharge System reusable tanks that provide breathable air to station crew members. The tanks will be refurbished on Earth and sent back to the station on a future flight.

“We have had an excellent flight test of a complex system that we expected to learn from along the way and we have,” said Mark Nappi, vice president and program manager, Boeing Commercial Crew Program, in a statement. “Thank you to the NASA and Boeing teammates who have put so much of themselves into Starliner.”

The flight tests completed Wednesday began on May 19 with a launch from Florida’s Cape Canaveral Space Force Station atop a United Launch Alliance Atlas V rocket. When Starliner completes its next flight, Boeing will have fulfilled NASA’s goal of having two commercial vehicles to transport astronauts safely, reliably, and sustainably to the station from American soil.

“With the completion of OFT-2, we will incorporate lessons learned and continue working to prepare for the crewed flight test and NASA certification,” Nappi added.

In a separate press release, NASA said Starliner touched down about four hours after departing the space station,  wrapping up the six-day flight, which tested the capabilities of the crew-capable spacecraft. The landing followed a deorbit burn at 4:05 p.m., separation of the spacecraft’s service module, and successful deployment of its three main parachutes and six airbags.

“NASA’s Commercial Crew Program and our industry partner, Boeing, today took a major and successful step on the journey to enabling more human spaceflight missions to the International Space Station on American spacecraft from American soil,” said NASA Administrator Bill Nelson. “The OFT-2 mission represents the power of collaboration, which allows us to innovate for the benefit of humanity and inspire the world through discovery. This golden era of spaceflight wouldn’t be possible without the thousands of individuals who persevered and poured their passion into this great achievement.”

Following liftoff, Starliner successfully entered Earth’s orbit, performed a series of demonstrations of its capabilities, and docked with the orbital outpost 26 hours after launch. The Expedition 67 crew aboard the station opened hatches and entered the capsule for the first time, inspecting the spacecraft and verifying integration with power and communications station systems for longer stays in the future. The station crew also unloaded 500 pounds of cargo delivered by Starliner and sent 600 pounds of cargo back to Earth.

According to NASA, a critical step in validating the performance of Boeing’s systems, OFT-2 brings the nation a step closer to having two human transportation systems to carry astronauts to and from the space station from U.S. soil.

Boeing retrieved the spacecraft from the desert and will transport it back to the company’s Commercial Crew and Cargo Processing Facility at NASA’s Kennedy Space Center in Florida for processing. After NASA and Boeing review processes data from this test flight, teams will continue plans for Starliner and its next mission, the Crew Flight Test to the space station, NASA said.