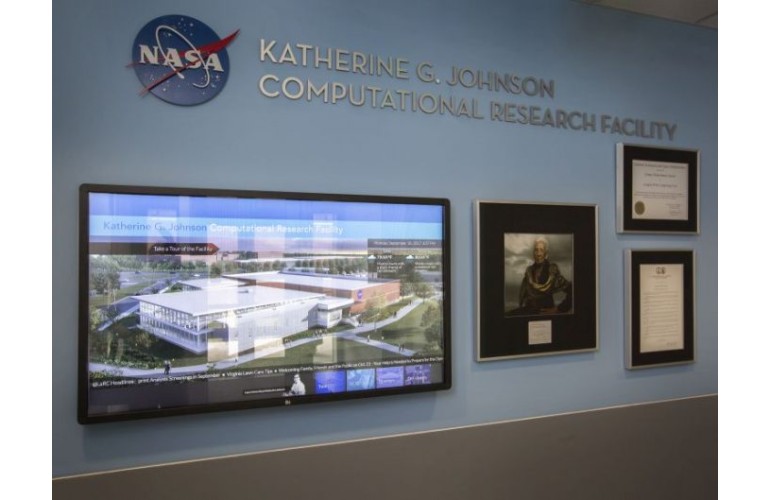 Johnson was a “human computer” at Langley who calculated trajectories for America’s first spaceflights. She worked at Langley from 1953 until retiring in 1986.

Her contributions and those of other NASA African-American human computers are chronicled in “Hidden Figures,” a movie based on author Margot Lee Shetterly’s book of the same name.

“You have been a trailblazer,” Virginia Gov. Terry McAuliffe said during the ceremony. “When I think of Virginia and the history of what we’ve gone through … you’re at the top of that list.”

Johnson held a fascination with numbers as a girl growing up in West Virginia. Eventually, she translated that love into using her math skills to help advance the nation’s space program in the 1960s.

“I like the stars and the stories we were telling, and it was a joy to contribute to the literature that was going to come out,” said Johnson, the central character in the book and movie “Hidden Figures.” “But little did I think it would go this far.”

“We’re here to honor the legacy of one of the most admired and inspirational people ever associated with NASA,” said Langley Director David Bowles. “I can’t imagine a better tribute to Mrs. Johnson’s accomplishments than this building that will bear her name.”

The $23-million, 37,000-square-foot (3,437 square-meter) structure is consolidating four Langley data centers. The building incorporates energy-saving features that are expected to be 33 percent more efficient than if those features had not been included.State of the art

“I always like something new,” Johnson said of the facility. “It gives credit to everybody who helped.”

The facility advances Langley’s capabilities in modeling and simulation, big data and analysis. Powerful computers like those in the CRF are capable of ever more complex analysis and simulation, in some cases replacing but also validating and complimenting the research done in NASA’s labs and wind tunnels. The CRF also houses an office area for researchers to do their work.

“We know that these are the tools that will help shape the world of the future,” Bowles said. “We’ll do more calculations than ever, and we’ll do them faster, more efficiently and with greater reliability.”

The Computational Research Facility will enable innovative research and development supporting NASA’s missions. It is the third building in Langley’s 20-year revitalization plan.