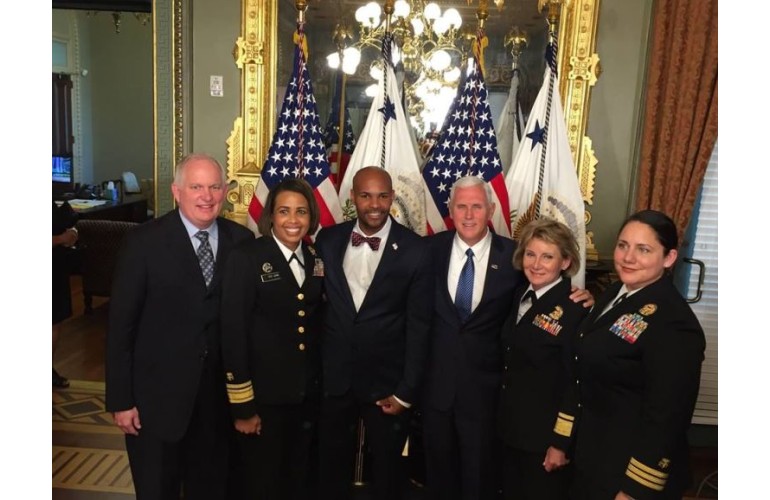 Updated Agust 1, 2018: Dr. Jerome M. Adams was sworn in as Surgeon General by Vice President Mike Pence at the Office of the Vice President in Washington D.C.

As the No. 1 doctor in the United States, Dr. Adams will give Americans the best scientific information available on how to improve their health and reduce the risk of illness and injury.

“Dr. Jerome Adams distinguished himself as an anesthesiologist at Eskenazi Hospital in Indianapolis, which serves our most vulnerable citizens, and as a clinical associate professor of anesthesiology at Indiana University,” Vice President Pence said.

While Pence was governor of the state of Indiana he appointed Adams to his cabinet. As health commissioner from 2014 to 2017, Adams dealt with infant mortality in high-risk areas and the opioid-fueled-HIV/AIDS epidemic in rural Indiana.

Jerome Adams’s father, a U.S. military veteran and retired tech Maryland teacher, says one medical experience that might have left a lasting impression on his son was going to hospital 22 times in one year because of his childhood asthma attacks.

Another experience that served as an inspiration was the Ebola virus outbreak in Zimbabwe. Adams did research in the southern African country as a biochemistry student attached to the Meyerhoff Scholars Program atUniversity of Maryland, Baltimore County (UMBC).

We would like to invite you to take part in our Public Health and Health Care Management-2020 Conference in Miami, USA during 16-17 April 2020. We hope your valuable experience would create a scientific atmosphere during the conference days.
So kindly let us know your interest towards our conference.