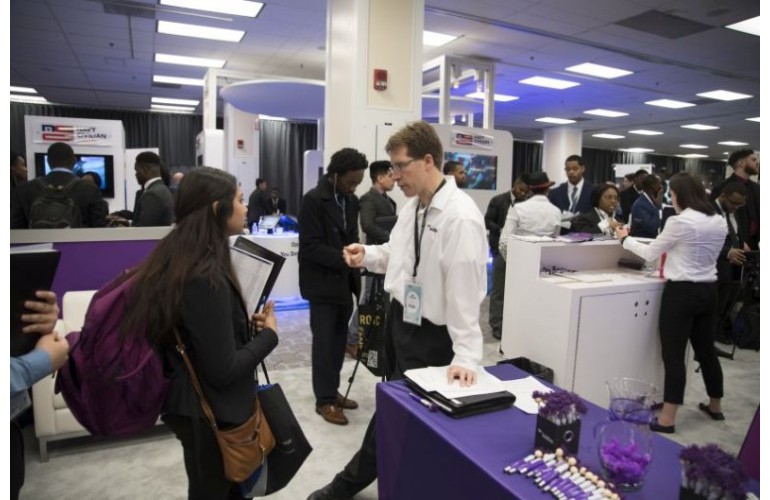 “I was able to watch various engineers and scientists who received awards at the BEYA conference,” Jackson said. “Fifteen years later, I was fortunate enough to receive an award.”

Jackson earned a bachelor’s degree in mechanical engineering from Old Dominion University in 2010 and then joined the Naval Surface Warfare Center Dahlgren Division Weapons Control and Integration Department as a Naval Acquisition Intern. She is currently on detail applying systems engineering modeling and architecture for control systems.

In 2012, Renee Reynolds was selected into the Naval Sea Systems Command in Washington DC, where she works as a junior engineer in the Surface Ship Readiness Program’s technical group.

Having been both in uniform and a contractor, she can coordinate changes to Navy ship installations. Reynolds has also started advocacy for veterans transitioning from active duty. She presented a seminar at the 2016 BEYA STEM Conference, where Jackson received the Modern-Day Technology Leader award.

Reynolds and Jackson are part of a growing number of Navy civilians who attend the annual Black Engineer  STEM Conference every year.

“This award has challenged me to contribute more towards empowering our youth while encouraging interest in science, technology, engineering and mathematics (STEM) fields,” Nelson said. “Giving back and empowering people to reach their full potential is vital to stimulating enthusiasm about STEM.”

The Navy Civilian Careers program is a partnership between five Navy Systems Commands, which all have one goal in mind: to encourage the best and brightest candidates to pursue civilian careers within the Department of the Navy.