Parker Solar Probe gears up to face the Sun 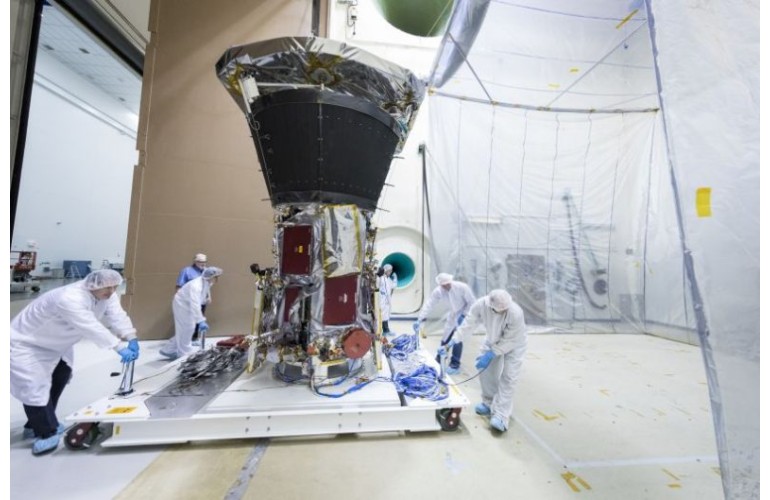 NASA’s Kennedy Space Center in Florida is gearing up a spacecraft to touch the Sun, the hottest, fiery ball in the entire solar system.

“In just a few short weeks, we’re launching Parker #SolarProbe to the Sun. It will travel through the corona, where temperatures can spike upwards of a million degrees Fahrenheit,” @NASASun tweeted recently.

The launch, which was slated for summer, is expected to now take place no earlier than Monday, Aug. 6, NASA said in a press release. Additional time was needed to evaluate the configuration of a cable clamp on the payload fairing.

About the size of a small car, the Parker Solar Probe satellite will launch on a United Launch Alliance Delta IV Heavy rocket from Space Launch Complex 37 on Cape Canaveral Air Force Station in Florida.

To ensure the spacecraft doesn’t melt in temperatures that can soar up to 2,500 F (1,377 C), Parker has been designed with a heat shield and a system that helps protect it from the Sun’s intense light emission but does allow the coronal material to “touch” the spacecraft.

The agency says NASA’s Parker Solar Probe will answer questions about solar physics that have puzzled scientists for more than six decades.

According to NASA, gathering information about processes near the Sun can help improve human understanding of how space weather can affect astronauts, interfere with the orbits of satellites,  damage onboard electronics, and how the Sun changes our space environment.

Parker Solar Probe will use Venus’ gravity over nearly seven years to gradually bring its orbit within 3.8 million miles of the Sun’s surface — more than seven times closer than the Helios 2 spacecraft, which came within 27 million miles in 1976.

Watch the streaming live on NASA TV and Facebook https://facebook.com/NASASunScience