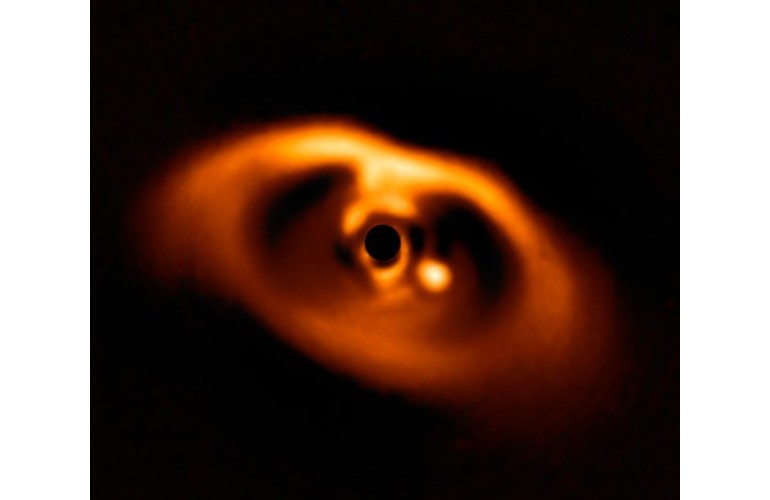 The first image of the birth of a planet has been captured by astronomers at one of the world’s leading astronomical observatories. The snapshot shows a dust-covered planet in the act of formation around the very young star PDS 70.

SPHERE, which studies exoplanets and discs around stars, is on the European Southern Observatory’s Very Large Telescope.

“After more than a decade of enormous efforts to build this high-tech machine, SPHERE enables us to reap the harvest with the discovery of baby planets,” said Thomas Henning, director at the Max Planck Institute for Astronomy.

The planet-hunting instrument captured the planet’s path through the primordial disc of gas and dust.

“These discs around young stars are the birthplaces of planets, but so far only a handful of observations have detected hints of baby planets in them,” explains Miriam Keppler, who led the team behind the discovery of PDS 70’s still-forming planet.

PDS 70b is a giant gas planet with a surface temperature of around 1000°C, making it hotter than any planet in our own solar system. It is located billions of miles from the central star, about the distance between Uranus and the Sun.

The planet stands out as a bright point to the right of the center of the image, which is blacked out by the coronagraph mask used to block the blinding light of the central star.

But even when blocking the light from a star with a coronagraph, the team of astronomers say SPHERE still  has to use data processing techniques to filter out the signal of the faint planetary companions around bright young stars.

The disc and planet images and the planet’s spectrum have been captured in the course of  two survey programs called SHINE (SpHere INfrared survey for Exoplanets) and DISK (sphere survey for circumstellar DISK).

According to the astronomy organisation, SHINE aims to image 600 nearby stars in the near-infrared using SPHERE’s high contrast and high angular resolution to discover new exoplanets and planetary systems.

DISK explores known, young planetary systems and their circumstellar discs to study the initial conditions of planetary formation and the evolution of planetary architectures.