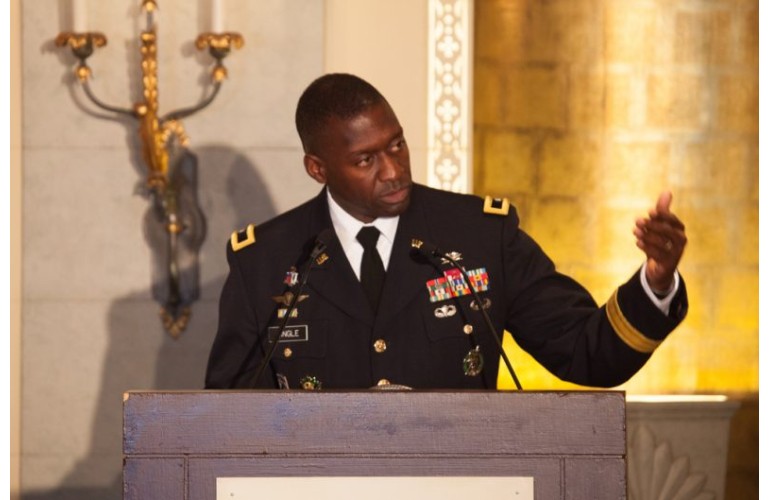 The Regional Health Command – Atlantic, which is part of the U.S. Army Medical Department, maintains the readiness of America’s warriors and ensures that a medical force is ready to deploy with them to provide casualty care.

A distinguished military graduate of Morgan State University, Brig. Gen. Dingle has served nearly 30 years in the U.S. Army.  He is the 16th general officer to graduate from Morgan State and is recognized as the first Medical Service Corps officer to reach the rank of brigadier general.

His service began as an Ambulance Platoon leader. Dingle’s next assignment was at the McDonald Army Community Hospital, Fort Eustis, Virginia, where he served as an adjutant in plans, operations, training, and security.

In 1991, he assumed command of the Medical Company and Medical Detachment. From 1992 to 1995 he served in Germany as commander of Charlie Company, 3rd Forward Support Battalion.

After command, he served as the 3rd Infantry Division Plans Officer for the Division Medical Operations Center. In July 1995, he became an Instructor with the Army Medical Department Center and School Officer Basic and Advanced Courses.

In January 1999, he returned to Germany as the 1st Armored Division’s chief, Division Medical Operations Center. He next attended Command and General Staff College and the School of Advanced Military Studies (2001-2002).

In June 2006, he returned to the states and was assigned to the Office of the Surgeon General as chief, Current Operations, Special Plans Officer, and later as a healthcare operations executive officer. From 2009-2010, he commanded the 261st Multifunctional Medical Battalion, Fort Bragg, North Carolina.

Brig. Gen. Dingle next assumed command of U.S. Army Medical Recruiting Brigade, Fort Knox, Kentucky from July 2010 to July 2012. He relinquished command in July 2012, to attend the National War College. Upon completion, he returned to the Office of the Surgeon General as the director, Health Care Operations/G-3.

He was selected for command and assumed command of the 30th Medical Brigade, Germany in May 2014. In June 2015, he became deputy chief of staff for staff operations at the U.S. Army Medical Command.

His awards and decorations include the Army Surgeon Generals prestigious 9A Proficiency Designator.

In the photo, Brig. Gen. Dingle is speaking at a recent Brain at War annual meeting, a leading national conference on the neurological and psychological wounds of war, sponsored by NCIRE—The Veterans Health Research Institute.

The Regional Health Command – Atlantic is working to build a healthier Army and healthier nation.