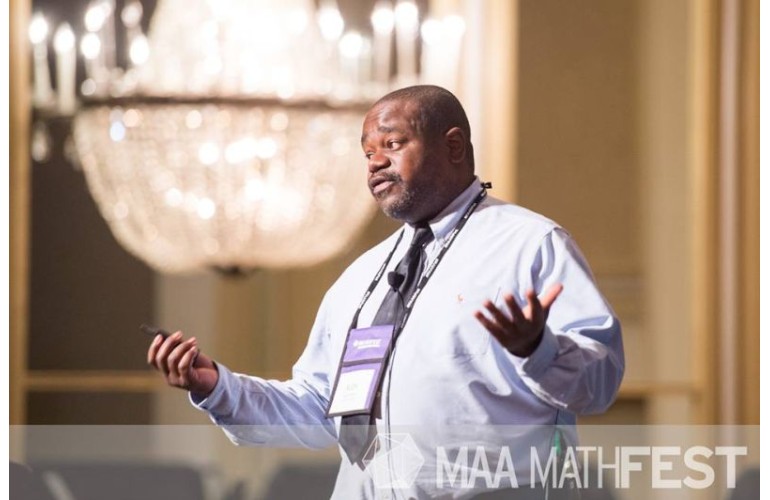 Conference attendees at the 2018 MAA Mathfest in Denver, Colorado, the summer gathering of the Mathematical Association of America, honored Morehouse College mathematician Rudy Horne, who gave so much to the field of mathematics.

Dr. Horne was hired as an assistant professor at Morehouse in August 2010 and served as a math consultant for the Oscar-nominated film “Hidden Figures” in 2016.

Last summer, Horne gave the National Association of Mathematicians David Harold Blackwell Lecture at #MAAthFest, sharing his work as the mathematical consultant on the #HiddenFigures film. Horne passed away in December 2017.

“It was his job to make sure that all mathematical problems used in the film were accurate and historically relevant. His handwriting covers the chalkboard in a scene in which NASA genius Katherine Johnson (played by Taraji P. Henson) solved a quadratic equation. Horne received a film credit for his work and star treatment,” a Morehouse press release says.

Following the film, Horne spoke on the national lecture circuit at math and science conventions and at special events in higher education.

Prizes for the year’s best mathematics writing were also given on Aug. 2 in Denver at the MAA MathFest.

“We are proud of the Mathematical Association of America’s long history of publishing superb mathematical exposition,” said Michael Pearson, executive director of the MAA. “These prize-winning authors serve to inform and inspire our community. We all benefit from clear and effective writing that brings important results to the broadest possible audience.”

Two mathematicians are recipients of the Carl B. Allendoerfer Awards, which is given to authors for excellent mathematical writing published in the Mathematics Magazine, a journal of the MAA.

Each year an author is recognized for their excellent writing for an undergraduate audience, published in MAA’s magazine Math Horizons. This year’s recipient of the Trevor Evans Award is James Propp, University of Massachusetts, Lowell, for his article “The Paintball Party.”

The Paul R. Halmos-Lester R. Ford Award recognizes exceptional authors who have published in The American Mathematical Monthly, the MAA’s flagship journal. This year’s winners are:

The George Pólya Award recognizes the exceptional papers published in The College Mathematics Journal, a journal of the MAA. This year’s winners are: