Service to the Nation: Black in the Military 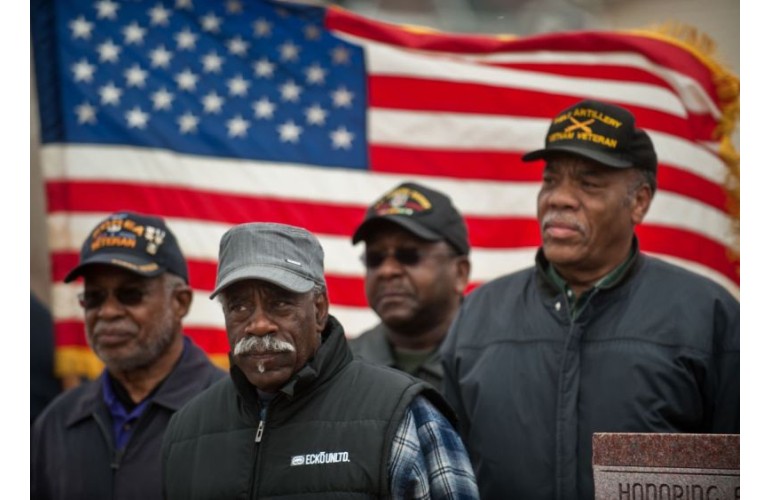 In this photo, African American veterans of the Vietnam and Korean wars, all of whom received a Purple Heart during their service, stand together during a ceremony in Virginia honoring their sacrifice. (Photo Credit: Courtesy Max OdenThe News Advance)

Historically black colleges and universities (HBCU) have produced numerous officers with a record of outstanding service.

Daniel “Chappie” James Jr. (1920 – 1978) graduated from Tuskegee University in 1942. During the Second World War, James trained pilots for the all-black 99th Pursuit Squadron.  In 1975, he became the first African American to reach the rank of four-star general.

Retired Maj. Gen. LaWarren Patterson graduated from Norfolk State University in 1982, receiving a commission as a second lieutenant in the Signal Corps.

Retired Army chief information officer Lt. Gen Ferrell enlisted in the Army and attained the rank of sergeant before enrolling at Hampton University. Upon graduation in 1983, he was commissioned into the Signal Corps.

Gen. Darrell K. Williams is a graduate of the Hampton Institute ROTC program. He was commissioned into the Army Quartermaster Corps in 1983.

Gen. Craig Crenshaw earned a bachelor’s degree in political science from Southern University, Baton Rouge. He was commissioned a second lieutenant in the Marine Corps in 1984 through the NROTC Program and began his career as a logistics officer with 3d Force Service Support Group, Okinawa, Japan.

In 1985, retired Rear Admiral Willie Metts graduated from Savannah State University with bachelor’s degree in electronics engineering technology and was commissioned via the NROTC. He last served at the U.S. Cyber Command as director of intelligence.

Gen. Mark A. Brown, commander, Second Air Force, was commissioned through the Reserve Officer Training Corps (ROTC) program at Tuskegee in 1986 with bachelor’s degree in accounting.

1. The first professor of Naval Science at Florida A&M University, Benjamin Hacker, went on to earn the rank of rear admiral.
2. In 2000, Hampton University commissioned the first African American female to enter the surface nuclear power community, Renee Reynolds.
3. The first graduating class from Prairie View A&M produced Adm. David Brewer, who went on to wear three stars before retiring.
4.  By the end of the war, the Tuskegee Airmen would be credited with 15,500 combat sorties and earn over 150 Distinguished Flying Crosses for their achievements. The successes of the Tuskegee Airmen helped pave the way for the integration of the U.S. armed forces.

Ladies and Gentlemen,
I wish to let you all know that I graduated from a HBCU at Xavier University of Louisiana then later went into the military in the U.S. Coast Guard. I served for 36 years and retired as Rear Admiral, but I noticed I am listed in your article only.
Thanks! Rear Admiral Stephen W. Rochon, USCG (Retired)