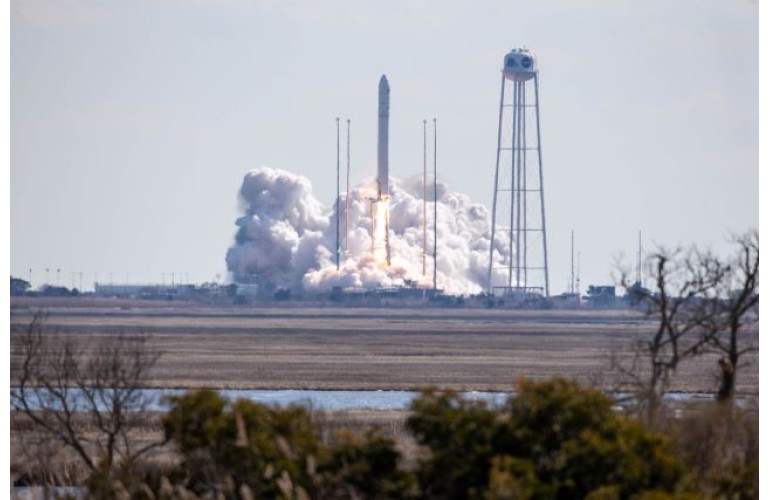 Probably the biggest news this weekend was Northrop Grumman’s cargo resupply launch. On February 20, as NASA marked the day fifty-nine years ago when John Glenn became the first American to orbit Earth, they also celebrated the launch of the spacecraft named after NASA’s “hidden figure” Katherine Johnson.

“I am humbled to be the International Space Station Flight Director for the Northrup Grumman CRS-15 mission,” said Adi Boulos, the lead NASA flight director for the mission, in a statement. “This spacecraft has the honor of being named the S.S. Katherine Johnson. As a Black woman, Katherine Johnson shattered race and gender barriers to live out her dreams and become a pivotal part of this country’s young space program. Fifty-nine years ago today, astronaut John Glenn became the first American to orbit Earth after personally asking for Katherine Johnson to verify his Mercury missions’ orbital trajectory calculations. Katherine Johnson was an asset to our space program, and I am honored to work for a mission that expands her legacy even further.”

Northrop Grumman names each Cygnus spacecraft in honor of individuals who have made substantial contributions to the United States’ commercial space program and human space flight. The NG-15 mission commemorates Katherine Johnson, a NASA mathematician and Black woman who not only broke through barriers of gender and race but delivered calculations that were critical to the success of numerous human spaceflight missions.

The “S.S. Katherine Johnson” will remain attached to the space station for approximately three months before departing with up to 8,200 pounds (approximately 3,720 kilograms) of disposal cargo.

The launch of Northrop Grumman’s Antares rocket took place from the Mid-Atlantic Regional Spaceport at NASA’s Wallops Flight Facility. It was Northrop Grumman’s 15th commercial resupply services mission to deliver NASA science investigations, supplies, and equipment to the International Space Station. Coverage of the spacecraft’s approach and arrival to the orbiting laboratory will begin Monday, Feb. 22, at 3:00 a.m. EST on NASA Television, the NASA app, and the agency’s website.

We have LIFTOFF of @NorthropGrumman’s S.S. Katherine Johnson spacecraft carrying 8,000 pounds of @ISS_Research & supplies to the @Space_Station! pic.twitter.com/jmJQTHtyKj

Northrop Grumman Cygnus resupply spacecraft, its 15h cargo flight to the space station, has approximately 8,000 pounds of science investigations and cargo. Cygnus launched on an Antares 230+ rocket from the Virginia Mid-Atlantic Regional Spaceport’s Pad 0A at Wallops.

The resupply flight will support dozens of new and existing investigations. Included in the scientific investigations Cygnus is delivering to the space station are worms to learn about muscle loss, technology to close the gap for the urine waste stream of the space station,  test technologies for use on future missions to the Moon, and how commercial off-the-shelf computer systems can advance space exploration by reliably processing data significantly faster in space, speeding scientists’ time to data access and analysis from months to minutes. Other investigations will monitor astronaut sleep quality during a long-duration flight mission, and whether microgravity could optimize the production of retinas and assist people back on Earth,

According to NASA, these are just a subset of the hundreds of investigations currently being conducted aboard the orbiting laboratory in the areas of biology and biotechnology, physical sciences, and Earth and space science. Advances in these areas will help keep astronauts healthy during long-duration space travel and demonstrate technologies for future human and robotic exploration missions as part of NASA’s Moon and Mars exploration approach, including lunar missions through NASA’s Artemis program.

The Cygnus spacecraft will remain at the space station until May before it disposes of several thousand pounds of trash through its destructive re-entry into Earth’s atmosphere.