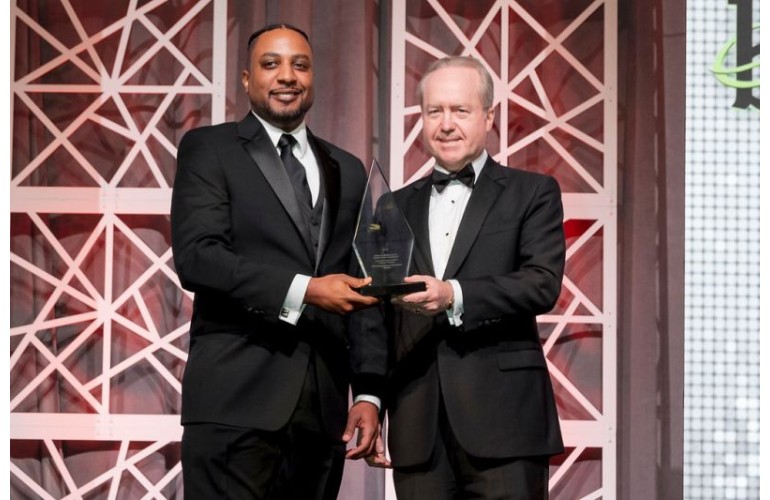 Growing up in a single parent household in Brooklyn, New York, young Adrian Williams walked in his neighborhood afraid to make eye contact with drug dealers. But an academic scholarship to a private school would open the door to new opportunities.

The award recognizes scientists and engineers who make outstanding contributions to technology development in industry and government.

“Dr. Adrian Williams is an invaluable contributor to the maturation of gallium nitride semiconductor device technology at Raytheon,” Thomas said. “GaN integrated circuits produce five times the RF power density as legacy circuit technologies, dramatically increasing the effective range and power efficiency of radar and jamming systems. Adrian’s work in process development and yield improvement has made Raytheon an industry leader in gallium nitride radar systems, helping the company secure several multibillion-dollar defense programs. His work on his radars will help protect our nation and our men and women in uniform.”

Williams joined Raytheon in 2007 after earning his doctorate. By 2009, his work resulted in Raytheon becoming the first company to have a Gallium Nitride (GaN) foundry. In 2013, Williams was an integral part of the team that gave Raytheon a lead on a go-to-market technology resulting in Raytheon being selected as the first GaN insertion into a major Department of Defense program. Raytheon won Aviation Week‘s prestigious Innovation Award for leading the world’s defense industries in 2015.

“Growing up I had my share of diversity. We grew up poor; we constantly struggled and lived in fear in crime-ridden neighborhoods,” Williams said in his acceptance speech. “However, my love of science and ultimately my career in engineering forged a prosperous story for my adult life and my children. I dedicate my accomplishments to them, and I stand before you as an example of what is possible with hard work, dedication and an indomitable spirit,”

“For those embarking on the study or practice of engineering, you will be immensely challenged,” he advised. “Revel in it, and you will be rewarded because like me you will be afforded the opportunity to change your life and change the world.”